Why Wetlands Can (And Should) Boost Your NDC 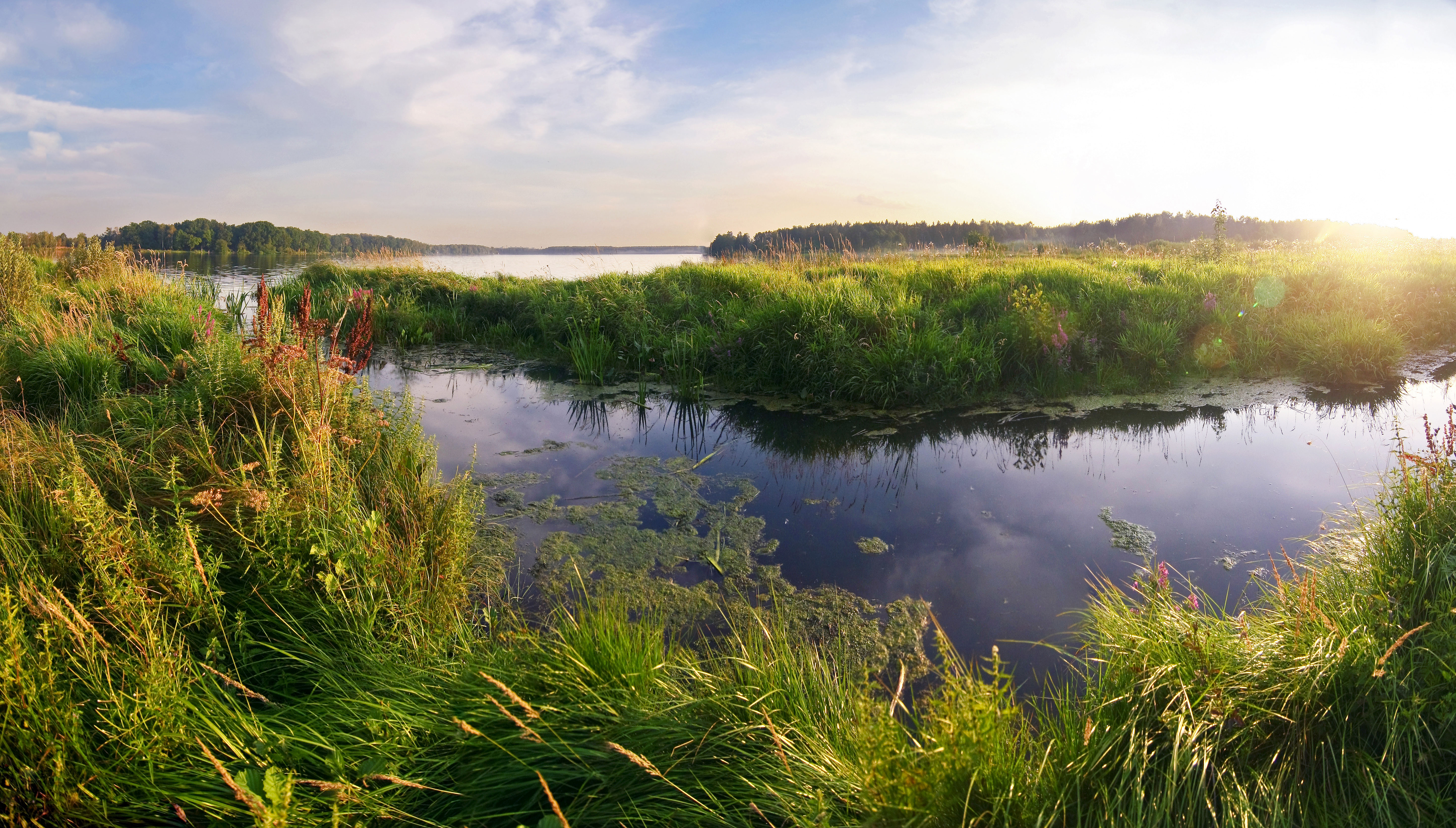 With emissions from the Agriculture, Forestry and Other Land Use (AFOLU) sector contributing 20-24 percent of global GHG emissions (second only to energy), a growing number of countries are looking to change how they use and manage land and water to achieve the deeper emission cuts needed for enhanced Nationally Determined Contributions (NDCs).

Safeguarding and restoring wetlands—lakes, rivers, marshes, peatlands, deltas, and coasts—can deliver a “triple-win’: reducing existing carbon emissions, avoiding future ones, and building the resilience of ecosystem services. Here, we outline five key reasons why countries should safeguard and restore their wetlands for cost-effective climate action that supports a post-COVID recovery. We also highlight NDC Partnership countries championing the inclusion of wetlands in their NDCs.

Wetlands, particularly peatlands, are carbon-rich ecosystems that have stored vast amounts of carbon over thousands of years. The Cuvette Centrale of the Congo Basin, for instance, is estimated to hold over 30 gigatons of carbon—equivalent to three years of global fossil fuel emissions. The frozen peatlands of western Siberia—currently on fire—are another major carbon megastore. Releasing these tropical and frozen emissions are enough to trigger an unrecoverable fatal positive feedback loop.

The major threats to these carbon stores are coming from land use change, particularly drainage of peatlands for intensive agriculture. At the same time, the industrialization of landscapes with roads and infrastructure is accelerating thawing permafrost. When it comes to drained organic soils, there’s an outsized impact from countries with the most GHG emissions, even when excluding emissions resulting from peat fires. Just three countries are responsible for 70 percent of the drained or organic soil emissions. The good news is that this provides a clear focus for action: safeguard the wetlands we have and restore what’s degraded.

That’s why the NDC Partnership is bridging gaps between country needs and institutional expertise to keep carbon locked in wetlands. Across its membership, the Partnership routinely helps to bridge these gaps by holding convenings and virtual events, developing knowledge products, and fast-tracking financial support to countries, which helps them plan and implement their NDCs. In turn, Partnership countries are integrating nature-based targets like wetland restoration for carbon storage and ecosystem resilience.

Restoring and safeguarding wetlands is cost-effective and low-regret

While engineered approaches have immediate, measurable impacts and are effective in reducing hazards in the short-term, they are expensive and deliver hardly any co-benefits compared to ‘nature-based solutions’ (NBS), according to a number of studies. In contrast, NBS are affordable and provide a range of co-benefits through ecosystem services and supporting more diverse livelihoods.

Eleven NDC Partnership countries are already availing of the membership’s expertise to integrate wetland conservation, restoration, and carbon budgeting into their adaptation and mitigation plans. Burkina Faso is reducing the vulnerability of natural resource-dependent livelihoods by restoring the country’s wetland ecosystems. Similarly, Uganda is strengthening its NDC by collecting baseline data on the vulnerability of the country’s wetlands.

The rehabilitation of Orshinsky Mokh in Russia is another example of the co-benefits of restoring wetlands. Initially aimed at preventing a repetition of devastating peatland fires during the summer of 2010 by rewetting some 220 square kilometres (22,000 ha) of drained peatlands, the vulnerability to fire has been reduced fourfold over the past decade and the mire has been put on a path to full restoration of its biodiversity and ability to store carbon. The total amount of emissions reductions achieved through rewetting is currently estimated at 320,000 metric tons of CO2 eq. per year. Fire prevention further reduces emissions by a similar amount. Restoration costs were about €30-100 per ha for ecosystem restoration and €3,000-5,000 per ha for infrastructure optimization.

One of the biggest hurdles for countries in implementing nature-based solutions in their NDCs is expanding the scope and nature of NBS. Of the 196 parties to the Paris Agreement, 130 have included NBS in their NDC, but only 36 of these have included the detail necessary to achieve measurable outcomes.

When it comes to wetlands, some countries have already begun inventorying ecosystems like peatlands to estimate their carbon stock baseline and—crucially—to calculate the anthropogenic emissions from degraded wetlands. Only those countries that have reported anthropogenic emissions from degraded wetlands can include wetland restoration activities and then claim reduction in subsequent reporting.

During the NDC enhancement process, countries can revisit their carbon stock and reporting mechanisms, and more thoroughly integrate NBS. Panama, for example, is working with international experts across the NDC Partnership to estimate the country’s blue carbon potential.

Another consideration for countries in approaching their NDCs is how to bring communities and the public on board. Without their support, action is likely to fail or be resisted. Safeguarding or restoring wetlands is most effective when it incorporates the communities that live on them since it engenders a sense of stewardship among those whose livelihoods depend on its health.

From Grenada to Indonesia, there are an increasing number of best practice examples where mangrove restoration has deployed local skills. Training in coastal management and/or sustainable livelihood practice is given along with small loans for alternative enterprise in exchange for labor, maintenance, or monitoring. Eco-tourism with birdwatching or sustainable fishing and aquaculture has helped increase incomes and boost local economies. The key here, as in the case of Grenada (where the community took ownership of monitoring and evaluation), is to ensure that the management of projects is accessible and widely understood.

Build resilience and achieve multiple environmental targets with one approach

One of the biggest challenges for countries in developing their NDCs is finding cost-effective solutions and approaches that support mitigation and adaptation to maximise benefits, reduce trade-offs, or prevent perverse outcomes. From an NBS perspective, trade-offs can arise if climate policy encourages low biodiversity value.

Managing wetlands, not just as carbon stocks but as a vital habitat and a part of landscape hydrological functioning, can result in a myriad of co-benefits, from higher yields of provisions and high biodiversity to flood management and water retention. Thriving, biodiverse wetlands function better and store more carbon because of the variety of flora and fauna and the resulting resilience of the ecosystem. At a time of looming economic crisis due to COVID-19, such co-benefits are key to the resilience of both local and national economies. For example, Peru, through the NDC Partnership’s new embedded Economic Advisors initiative, has requested Partnership support for integrating peatland conservation in climate-related COVID-19 recovery plans.

In this way, wetlands are the synergy between major global environmental frameworks and have relevance for targets—not only those set out in the Paris Agreement but also in the Land Degradation Neutrality set by the United Nations Convention to Combat Desertification (UNCCD) and the post-2020 biodiversity framework led by the Convention on Biological Diversity (CBD).

We are currently headed for 3˚C of global warming under current NDCs. We badly need ambitious plans that will bend this curve. Every country has wetlands, whether rivers, lakes, marshes, peatlands, mudflats, or mangroves. By including wetlands in their revisions, countries can take a significant step towards raising ambition while supporting adaptation, resilience, and meeting other targets.