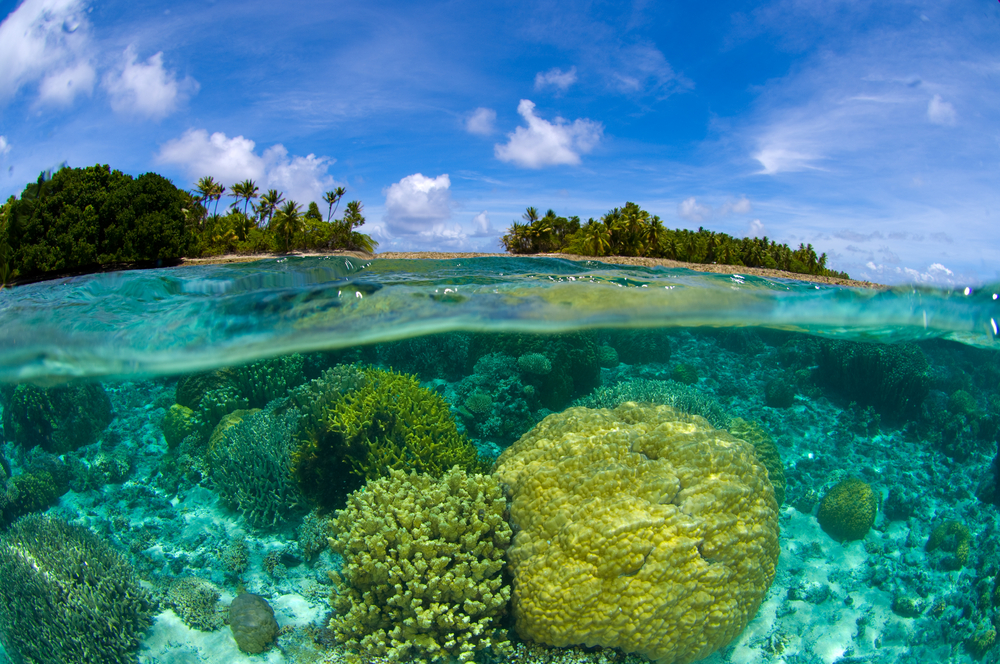 The oceans have absorbed 93% of excess heat from greenhouse gas emissions since the 1970s. The Intergovernmental Panel on Climate Change (IPCC) recently released a Special Report on the Ocean and Cryosphere in a Changing Climate (SROCC) which stated that sea level rise is accelerating at an ‘unprecedented’ rate, that worst-case projections are higher than previously thought and a 2m sea level rise by 2100 ‘cannot be ruled out’. Countries are starting to understand oceans are a key piece of the climate puzzle. The UN Climate Summit, COP25 (previously scheduled for Chile which will now be held in Madrid) will have a strong ocean focus. Some are calling COP25 the ‘Blue COP’. In advance of the ‘Blue COP’, we take a look at what kinds of requests the NDC Partnership has seen from countries related to a particular ocean climate solution known as ‘Blue Carbon’.

Interest in Blue Carbon as a climate solution is growing. In the first round of NDCs, 28 countries included some kind of reference to coastal wetlands in their mitigation actions, while 59 countries included coastal ecosystems or coastal zones in their adaptation strategies.  Yet, given the gravity of the situation the global community faces due to climate change, and the high potential of Blue Carbon to offer triple value benefits in adaptation, mitigation and resilience, more countries may seek inclusion of Blue Carbon in their NDCs.

The NDC Partnership has received 60 requests for support from 17 countries related to ‘oceans & coasts’ for their NDC Implementation Plans (The NDC Partnership commonly refers to these as ‘Partnership Plans’. Sometimes they are called Implementation Plans or Investment Plans depending on country preference). Of the 17 countries that submitted ocean and coast requests to the NDC Partnership, 4 of these countries did not include Blue Carbon in their first round of NDCs, according to a 2016 study.  These four countries are: Jordan, Mozambique, Namibia and Sao Tome & Principe. Country interest in Blue Carbon is increasing. However, ‘ocean and coast’ requests account for only 2% of total country requests to the Partnership. Why haven’t requests for Blue Carbon implementation measures grown more rapidly, particularly, given that Blue Carbon sequesters, on average, 10 times more carbon per hectare than terrestrial ecosystems. Recent studies indicate that restoring wetlands globally could potentially offer 14% of needed mitigation potential to maintain global temperature rise within 2C above preindustrial levels. Blue Carbon offers many co-benefits as well including: increased fishery production and food supplies, traditional medicine, support for local communities, and biodiversity conservation. There is untapped potential at the country level related to the implementation of Blue Carbon in NDCs.

What Kind of Ocean & Coastal Support Do Countries Need?

Countries’ requests for support related to their NDC Implementation Plans tend to fall along a spectrum of services. The type of service countries are requesting can provide some insight into the progression of a given topic within the country. For instance, the spectrum of requested services includes the following: requests focusing on ‘policy strategy and legislation’ such as the development of a national climate change law; requests related to ‘budgeting and investment’ like improved financial instruments; or needs for ‘monitoring & evaluation’ such as the development of MRV systems; and finally for ‘knowledge products’ such as the production of a study or the development of an online tool.

Of the 60 requests focusing on oceans and coasts, a third of them focus on ‘Policy, Strategy & Legislation’. For instance, Sao Tome & Principe has requested support to develop infrastructure to protect communities and assets in vulnerable coastal areas to reduce climate and disaster risk. And the Dominican Republic has requested support to ‘review current regulations, such as coastal land use, which are critical to adaptation in these highly vulnerable areas’. Another third of the requests related to oceans and coasts pertain to ‘budgeting and investment’. For example, Sao Tome and Principe is requesting investment in ‘physical infrastructure and training to reduce risks and vulnerabilities in the fishery sector’. Requests for knowledge products comprise approximately 31% of the ocean and coast requests. Along these lines, Namibia is seeking to develop and implement a tool to monitor intertidal biodiversity for conservation of biodiversity in fisheries.

In their requests for support related to NDC Implementation Plans countries mention ‘oceans’ or ‘coasts’ more frequently than they mention key terms classically associated with Blue Carbon such as ‘mangroves, salt marshes, or sea grass meadows’. Out of the 60 requests related to oceans and coasts, the words ‘mangrove’, ‘Blue Carbon’ or ‘blue solution’ appear only 5 times. For instance, Gabon has requested ‘legislation to strengthen and protect Mangroves’, and Jordan, in its request for support letter, requested technical assistance to protect coral and sea grass ecosystems at Aqaba through developing management approaches and policy mechanisms to conserve and integrate natural carbon sinks into climate mitigation policy. However, the majority of requests make reference to terms such as: coastal areas, coastal land use, shorelines and beaches, or ocean management strategies. Many of these requests include accompanying terms such as nature-based solutions or forestry. When requests include a cluster of these topics there are indications for a possible association to Blue Carbon. This highlights that while countries may not explicitly be mentioning Blue Carbon (or terms most typically associated with Blue Carbon) in their NDC Implementation Plans, countries are clearly thinking about coastal resilience and coastal planning. This provides a possible entry point for Blue Carbon.

Due to the nature of requests the Partnership is receiving, it is clear countries could further tap into the potential Blue Carbon has to offer as a climate solution. To do this, technical capacities need to be supported in countries to increase Blue Carbon integration into their policies, strategies and legislation, their budgeting and investment practices as well as assistance to produce the studies and analyses necessary to inform inventories and planning related to blue carbon (particularly forest inventories and mapping). 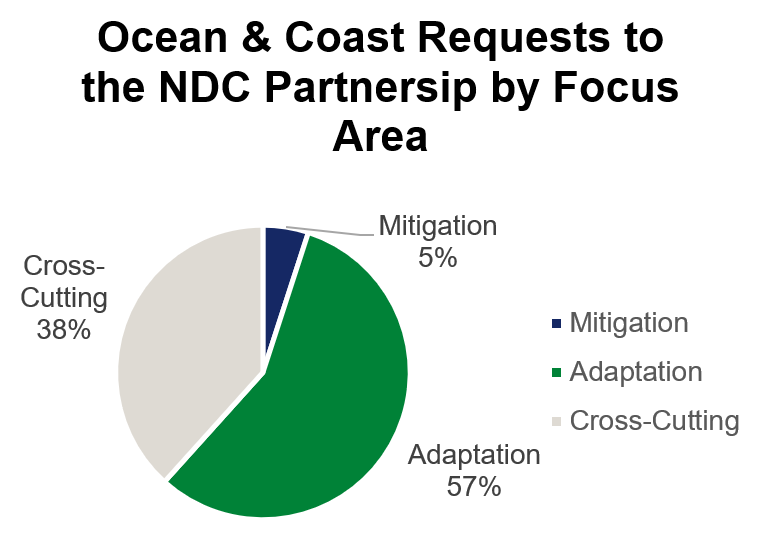 At the time of publication, 57% of the requests the NDC Partnership receives related to ‘oceans and coasts’ are related primarily focused on adaptation, 38% have a cross-cutting focus applying to both adaptation and mitigation, while 5% of ‘ocean and coast’ requests focus exclusively on mitigation.

This underscores that although coastal ecosystems offer immense mitigation potential, many countries are primarily approaching them primarily through an adaptation lens. Inclusion of coastal ecosystems in NDCs through an adaptation standpoint is an excellent starting point. Before incorporating these ecosystems into mitigation strategies and inventories many underlying enabling conditions need to be met, particularly the development of MRV systems. As stated earlier, the Partnership is also receiving many requests for the development of policies, strategies and legislations related to oceans and coasts as well as for support to develop capacity building in MRV systems. It is possible that in future rounds of NDCs more countries may include blue carbon in the mitigation section of their NDCs once the underlying enabling conditions have been built up.

Blue Carbon is a triple value climate solution, simultaneously offering benefits in adaptation, mitigation and resilience. It is rare to find a climate action that offers such a high return on investment across a variety of human and natural impacts. What would help countries further tap into the potential Blue Carbon has to offer as a triple value climate solution? How could technical capacities be further supported in countries to integrate Blue Carbon into policies, strategies and legislation as well as budget practices? Explicitly mentioning ‘Blue Carbon’ in NDCs (in either the adaptation or mitigation section) can act as a strong indicator a country is ready to implement on Blue Carbon, or that they are ready to accept support to build capacity to implement Blue Carbon solutions. For instance, implementing and developing partners whom might be able to provide assistance to countries in producing needed studies and analyses to include Blue Carbon in forest inventories, mapping, or GHG inventories would be cued into these needs by the explicit mention of ‘Blue Carbon’ in a country’s NDC.

NDCs are essentially nationally planning documents, and the presence, or absence, of certain language (such as reference to Blue Carbon terms) sends strong signals to domestic policy instruments. The inclusion of Blue Carbon terms in a country’s NDC could send clear signals to various sectors regarding where a country intends to move over time. Because Blue Carbon often straddles several sectors (forestry, coasts, agriculture), including specific reference to it in an NDC could help sectors increase their cross-sectoral coordination over time for better management of these ecosystems.

This blog was written by Catherine Martini, Country Engagement Specialist for the NDC Partnership Support Unit.