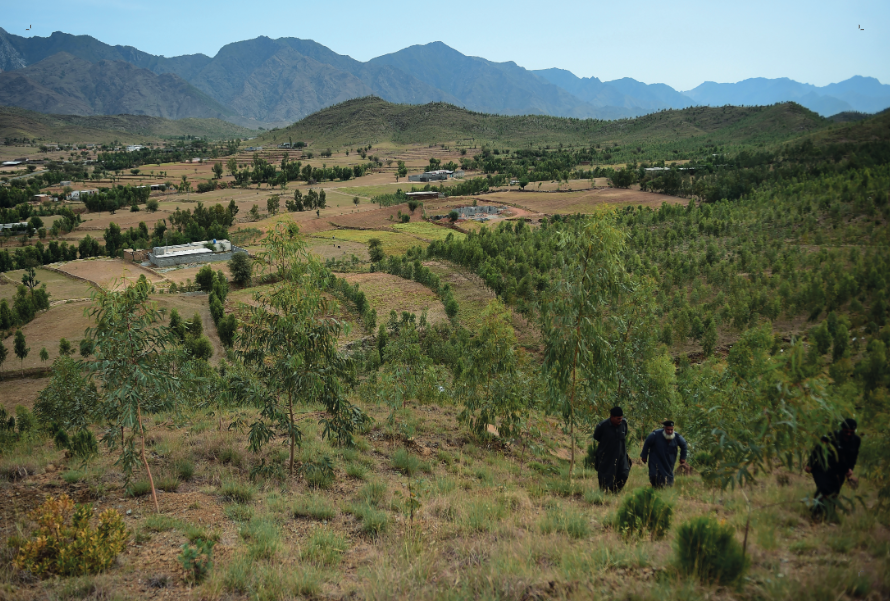 "Never before have we seen such a strong political ownership of the country's environment and climate change agenda as it is today. The political government, academia, media, general public, and especially youth, have all gotten into a very positive debate in the context of climate change, its dimensions, and how the countries' socio-economic and people's lives are now connected with the complex thread of climate change events.

Earlier the debate was in terms of actions by the developed countries taking the lead and reducing emissions; however, the discussion has now simultaneously moved towards all regions and their domestic policy framework for a greater mobilization towards nature aligned policies and actions.

Pakistan has in recent years come out strong in terms of commitment as well as visible action on various aspects of climate change from energy to transport emissions, urban resilience; conservation of biodiversity and overall ecosystem through multiple inventions including massive afforestation. These commitments and actions are backed by strategy and funding commitments, which is unprecedented.

As all the countries are under the process of revising their NDCs and enhancing their ambitions. It is essential to highlight the work Pakistan has done so far and plan to do in the future, including the mega projects, e.g., such as 10 Billion Tree Tsunami, Clean Green Pakistan, and Green Stimulus package. Under the current situation of COVID-19, Pakistan aims to be a key player in the climate change arena and meet the global and national goals more efficiently."

Among the first NDC Partnership members, Pakistan is delivering its Partnership Plan in close collaboration with the NDC Support Unit, 18 implementing partners, and diverse public and private sector groups. In particular, the country is galvanizing efforts to meet emissions targets by expanding initiatives in the energy and forestry sectors and increasing resilience for economic sectors and vulnerable communities.

Partner organizations provide support to deliver broader stakeholder consultations, integrate gender and youth considerations, and build human and institutional capacity around mitigation and adaptation. This is achieved by, for example, establishing Technical Working Groups to conduct sectoral assessments and strengthen data for decision-making.

As the sixth most populous country, Pakistan faces a potential increase in GHG emissions as its economy and society grow. The energy sector (46 percent of total emissions) is the largest emissions contributor, followed by agriculture (43 percent). To meet growing demands, energy and forestry sector initiatives are expanding to enable Pakistan to meet its 20 percent GHG emissions reduction target and to build climate resilience.

UNDP, along with Germany (through GIZ), will support the country as it establishes a national GHG inventory management system, primarily through strengthening cooperation with climate and emissions data providers. Existing baselines will be revised to include actions undertaken for carbon sequestration under the forestry sector, emissions under energy, and other priority sectors.

CARBON SEQUESTRATION UNDER THE FORESTRY SECTOR

Pakistan is expanding carbon sequestration by scaling-up mass afforestation initiatives with the joint aims of countering the potential rise in emissions and providing new sources of revenue.

Pakistan’s 10 Billion Tree Tsunami initiative is built on a successful and powerful initiative called Billion Trees Afforestation Project (BTAP) in Khyber Pakhtunkhwa Province in 2015. BTAP’s outcomes have been duly acknowledged by the United Nations Environment Programme, Bonn Challenge, and other international bodies and fora. After the project’s success was confirmed by independent monitors, Pakistan set a goal to plant 10 billion trees. This wider project is ongoing and will take a phased approach. It is expected to deliver dividends by preserving atmospheric health; reducing greenhouse gas effects; lowering cases of random floods, rains and droughts; and supporting biodiversity.

With support from Germany (through GIZ), Pakistan will estimate carbon sequestration from mass afforestation projects and analyze additional impacts on ecosystems, biodiversity conservation, and habitat improvement. The National REDD+ Office prepared the drawing of forest inventory with partner support, including the World Bank. Impact assessments will be led by WWF. Pakistan also plans to legislate its national carbon market, capitalizing on new revenue sources created through carbon sequestered from forestry projects. By setting up the institutional, legal, technical, and financial arrangements required to mobilize large-scale finance for forestry sector projects, Pakistan is getting into a strong position to achieve multiple mitigation targets and adaptation co-benefits for its economy and society.

Pakistan’s energy sector is committed to identifying new actions to phase out harmful refrigerant gases, with the aim of eliminating their use by 2028 as per the Kigali Amendment to the Montreal Protocol. To support this ambition, UNDP conducted a range of direct and indirect emissions analyses, scenario development for HCFC/HFC consumption, and forecasting for reduction targets. Stakeholder workshops enable discussions between industry stakeholders and relevant government counterparts to identify strategies for phasing out refrigerant gases.

HFCs form a blanket at high altitudes, holding in heat; they have 9,000 times greater capacity to warm the atmosphere than carbon dioxide. Among the world’s hottest countries, Pakistan is vulnerable to heat waves, which contribute to melting glaciers, droughts, monsoons, and desertification. Phasing out refrigerant gases will have important advantages for Pakistan to meet its emissions targets.

Partnership Plan projects (see How the Partnership Works section) will contribute to installed capacity of renewable energy sources in the national grid and reduce annual emissions by 30 million tons of CO2e by 2030. This reduction is equivalent to not burning 15 million tons of coal or removing 6.5 million cars from the road each year. This will increase energy security and provide sustainable energy for Pakistan’s development, showing that development and the fight for climate change can walk together.