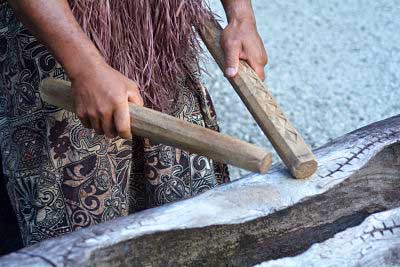 Suva, Fiji  -- Thirteen out of fourteen Pacific Island governments have nominated their focal points for the Pacific Nationally Determined Contributions Hub (Pacific NDC Hub) showing the on-going commitment of the region to accelerating its full establishment and operationalisation.

The focal points agreed on the modalities for the selection of steering committee members and that it must be established as a matter of urgency. These were key outcomes after ten out of fourteen Pacific Island Countries came together to further talks in establishing the Pacific NDC Hub.

“Climate change is a global challenge - and collective challenges require a collective response as it is having an outsized and immediate impact on the Pacific, even though the region’s contribution to greenhouse gasses is insignificant. Nonetheless, the Pacific region has shown in their NDCs they are ready to lead by example given the urgency” said Chair of the meeting Ulu Bismarck Crawley, Chief Executive Officer of Samoa’s Ministry of Natural Resources and Environment.

The creation of the Pacific NDC Hub was inspired in the wake of the Paris Agreement, which was widely applauded as a universal call for all nations to band together to combat climate change, based on bottom-up contributions which will be reviewed and strengthened over time in five year cycles. NDCs are aimed at achieving ambitious but essential long-term goals of limiting global temperature rise and building resilience to climate impacts.

First envisaged at the Climate Action Pacific Partnership meeting in 2017 and formally launched at COP23 by the Hon. Prime Minister of Fiji and COP23 President Bainimarama, the Pacific NDC Hub is being established to support Pacific Island Countries towards achieving their ambition of limiting global temperatures to 1.5 0C through their NDCs.

The Pacific NDC Hub is now moving from the design stage to the delivery stage and will be operational by early next year. It is committed to supporting countries in the region with implementing and enhancing their NDCs. Support for the Pacific NDC Hub within the Pacific community has been strong, but there is a recognition further funding is required to fully service country needs. Countries acknowledged the added value that the Pacific NDC Hub brings to the region and urged for its operations to commence as soon as possible.

The overall objective of Pacific NDC Hub is for Pacific Island Countries to enhance and implement their NDCs, driving sustainable and resilient development and a transition to a low carbon development pathway. The NDC Hub will provide technical and facilitate partnerships to enhance and implement the region’s NDCs. The NDC Hub builds upon existing networks and mechanisms in the region. It contributes and aligns to national climate change policies and frameworks, including the Framework for Resilient Development in the Pacific and the Regional Technical Support Mechanism.