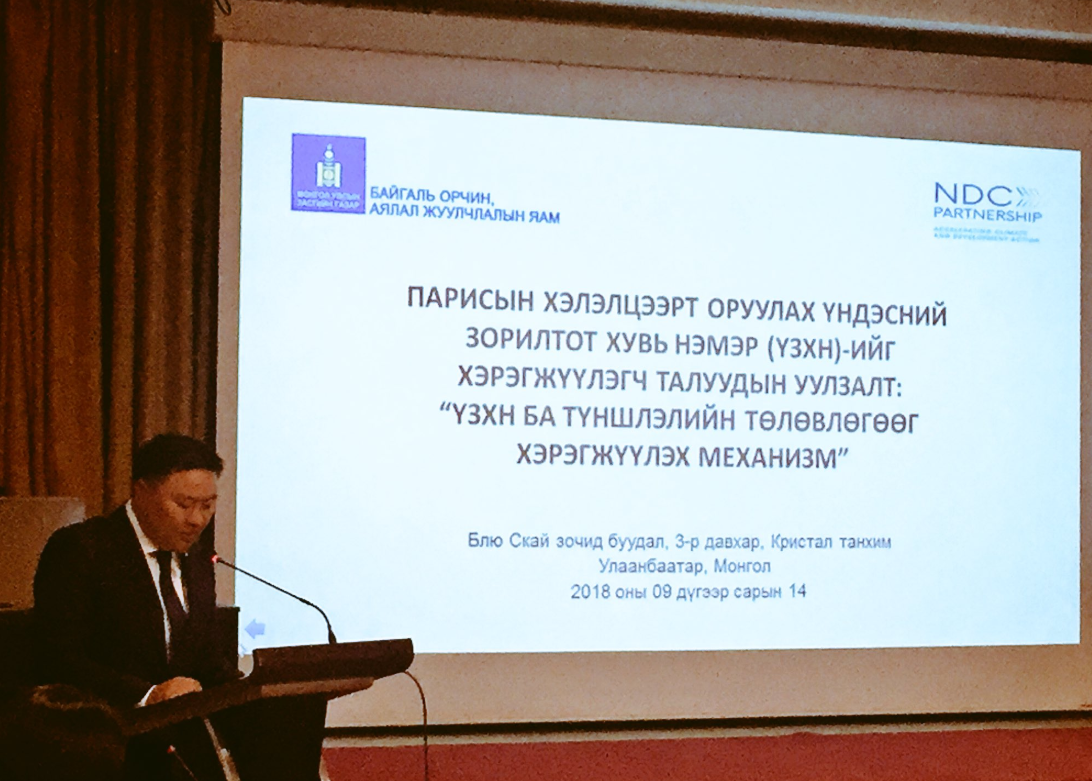 In 2016, H.E. Mr. Elbegdorj Tsahia, former President of Mongolia explained, “Mongolia is one of the smallest emitters in the world but suffers disproportionally from the climate change. Desertification, deforestation, and the loss of biodiversity have been severe blows to the livelihoods of our traditional nomadic culture, and they spur further environmental degradation…We have one home, one world for all of us, and we have one universal goal to save it. And, today is our time to act. We must not miss it as we cannot miss our future.”

Mongolia is quickly emerging as a pioneer for climate action in the region, from launching the first Partnership Plan in the Asia-Pacific region, to adopting a whole-of-society approach to take real and sustained climate action, to embracing technologies to facilitate cooperation and coordination on NDC actions.

At the NDC Partnership Stakeholders Meeting in September 2018, Mr. Tserenbat Namsrai, Mongolia’s Minister of Environment and Tourism (MET), approved the NDC Partnership Plan - a basis for planning, coordination, resource mobilization, and transparency on NDC implementation between the government and partners to work together to help Mongolia achieve its climate and development goals. As the first country in the region to launch a Partnership Plan, Mongolia is setting a positive example on how to involve all relevant government bodies, Implementing Partners, and donors in its implementation. The Plan puts in place mechanisms to ensure its successful implementation, which in turn will ensure Mongolia meets is commitment to achieve a 14 percent reduction in greenhouse gas emissions by 2030, compared to a business-as-usual scenario.

At the Stakeholders Meeting, Mr. Tserenbat Namsrai explained, “Mongolia has already reached 70 percent of its 14 percent emissions mitigation goal. We are about to renew and update our NDCs by 2020. We need cooperation, coordination, and assistance from international partners, while working with primary domestic partners such as the MET, the National Development Authority, and the Ministry of Finance.”

The NDC Partnership, at the request of the MET, is supporting these efforts by helping the government build an online platform to facilitate cooperation on the implementation of Mongolia’s NDC. The platform will enable government and Implementing Partners to quickly and easily exchange information and improve collaboration on NDC implementation activities, share and access relevant information and documents, and clearly identify how individual actions and projects play an essential role in reaching common climate goals. This coordination will not only help support the efficient and effective implementation of Mongolia’s NDC, but will help the MET better mainstream climate change policies into sustainable development and national development plans. While most of the platform will be password protected and accessible to key implementers, a public-facing version of the website is also being built to raise awareness for the general public on Mongolia’s NDC and the actions being taken to implement it.

The online platform will be finalized in November 2018 and officially launched at COP24 in Katowice, Poland. A number of countries have already approached the NDC Partnership, eager to see the final platform and learn from Mongolia’s approach. At the Stakeholders Meeting, the MET also presented its proposal to bolster the National Climate Change Committee (NCCC), and a supporting Technical Working Group (TWG) as the supervisory and coordination mechanism to oversee the country’s NDC implementation. The NCCC will be chaired by the Minister of Environment and Tourism and will draw together focal points from relevant ministries and agencies. The TWG will play a supporting role, drawing in a wider group of stakeholders including those from the international development community, academia, civil society, and the private sector. Consultations are currently taking place to define a concrete process for how this coordination mechanism will operate.

Be sure to check the NDC Partnership website for continued updates on Mongolia’s progress.