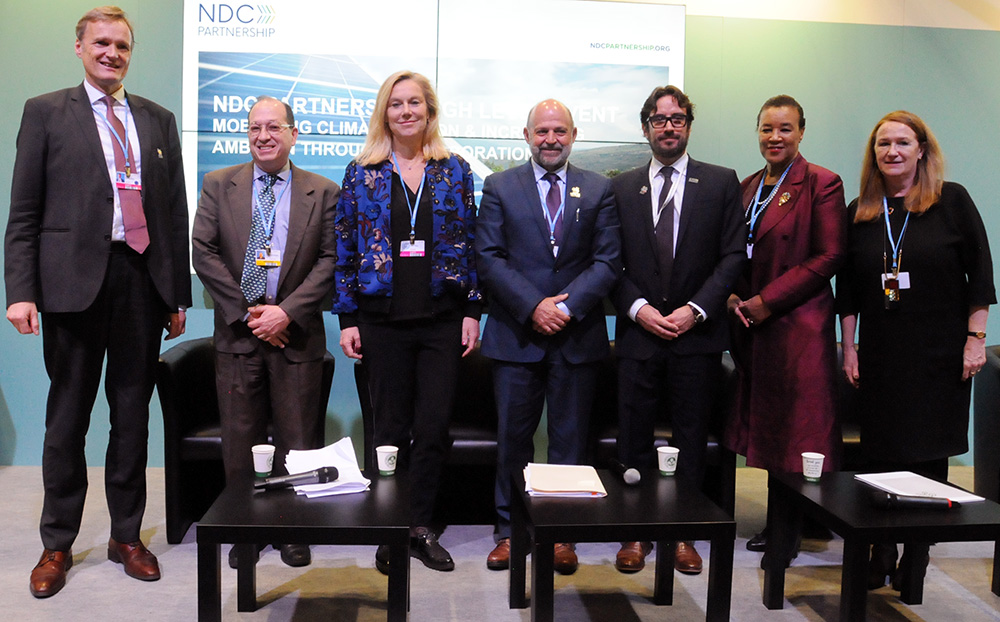 This high-level NDC Partnership event focused on enhancing nationally determined contributions (NDCs), including through the Climate Action Enhancement Package (CAEP), and marked the Partnership’s third year since its launch in 2016.

Mr. Andy Karsner, Conservation International Board Member, moderated this event. In his opening remarks, Mr. Pablo Vieira, Global Director, NDC Partnership Support Unit, lauded the Partnerships for its increase in membership, noting the growing number of countries working to enhance and implement their NDCs. He noted that although ambition levels to meet the Paris Agreement are not high enough yet, the achievements and commitment of Partnership members are commendable.

H.E. Carlos Manuel Rodríguez, Minister of Environment and Energy, Costa Rica, said that the increasing level of ambition from several countries currently undergoing socio-political change is encouraging, noting that this is “what this Partnership is all about.” He called on big emitters to join the Partnership to further increase global ambition to meet the goals of the Paris Agreement, noting the importance of the 2020 review of NDCs. He highlighted that the Partnership should also represent those absent from current negotiations, pointing to the gap between the level of progress and the expectation of global citizens. On accelerating progress, he stressed that implementing NDCs feel like “sailing on uncharted seas” as green economic pathways are as yet untested. He noted that the focus has been on jobs, without a link to the environment, and called for information on the costs and benefits of climate action, compared to the cost of inaction in order to spur increased ambition.

H.E. Sigrid Kaag, Minister for Foreign Trade and Development Cooperation, the Netherlands, lauded the work of the Partnership, acknowledging the CAEP and growth of the Partnership’s membership to 160 as signals of its significance. She noted continued efforts to promote gender-focused and rights-based approaches and underscored the importance of promoting responsible business conduct practices to implement strong adaptation actions. On accelerating progress, she cited the importance of political will and additional partnerships with civil society to support a “whole of government” approach.

Ms. Laura Tuck, Vice President for Sustainable Development, World Bank, lauded the Partnership’s work on focusing countries through the NDC Partnership Plans, which help countries: build sustainable economies through climate tagging; enhance NDCs in the run-up to COP 26; and leverage lending through the Bank’s International Development Association. She noted work in 33 countries on providing NDC support, including through capacity building, strengthening greenhouse gas (GHG) inventories, and building donor and investor trust. She also drew attention to the coalition of finance ministers supporting NDC implementation, and pointed to CAEP assisttance to developing countries to enhance their NDCs.

H.E. Malik Amin Aslam, Federal Minister and Advisor to the Prime Minister on Climate Change, Pakistan, welcomed the work of the Partnership in identifying NDC enhancement projects and partnerships in his country. Noting that the change of government has spurred accelerated NDC actions including on climate mitigation, forestry, and renewable energy, he outlined plans to increase mangroves, forests, and electric transport, as well as address air pollution. He announced the country’s Ecosystem Restoration Fund, with support of USD 180 million from the World Bank.

Wishing the Partnership a happy third birthday, Mr. Karsten Sach, Director-General, Federal Ministry of the Environment, Nature Conservation and Nuclear Safety (BMU), Germany, noted that the Partnership was set up to reach beyond climate and environment ministries, highlighting that for many countries, low-carbon growth pathways are becoming the norm.

Ms. Ingrid-Gabriela Hoven, Director-General, Global Issues – sector policies and programmes, Federal Ministry for Economic Cooperation and Development (BMZ), Germany, noted that BMU and BMZ are working with 50 countries, having pledged EUR 17 million to enhance NDCs. Stating that the NDC Partnership is country owned, she noted that this aspect guides development cooperation. She drew attention to a memorandum of understanding with the International Monetary Fund (IMF) on investing in climate action.

During the discussion, high-level participants considered the work of the Commonwealth Climate Finance Access Hub with developing countries to deliver USD 128 million, and the development of an NDC implementation toolkit to complement the work of the NDC Partnership. They also discussed eSwatini’s experience as part of the NDC Partnership, noting the role of least developed countries in addressing climate change, including through afforestation exercises to secure the future of the next generation. Participants also considered the gap between the current conditional NDCs and the global emissions level, and the World Bank’s role in supporting developing countries.