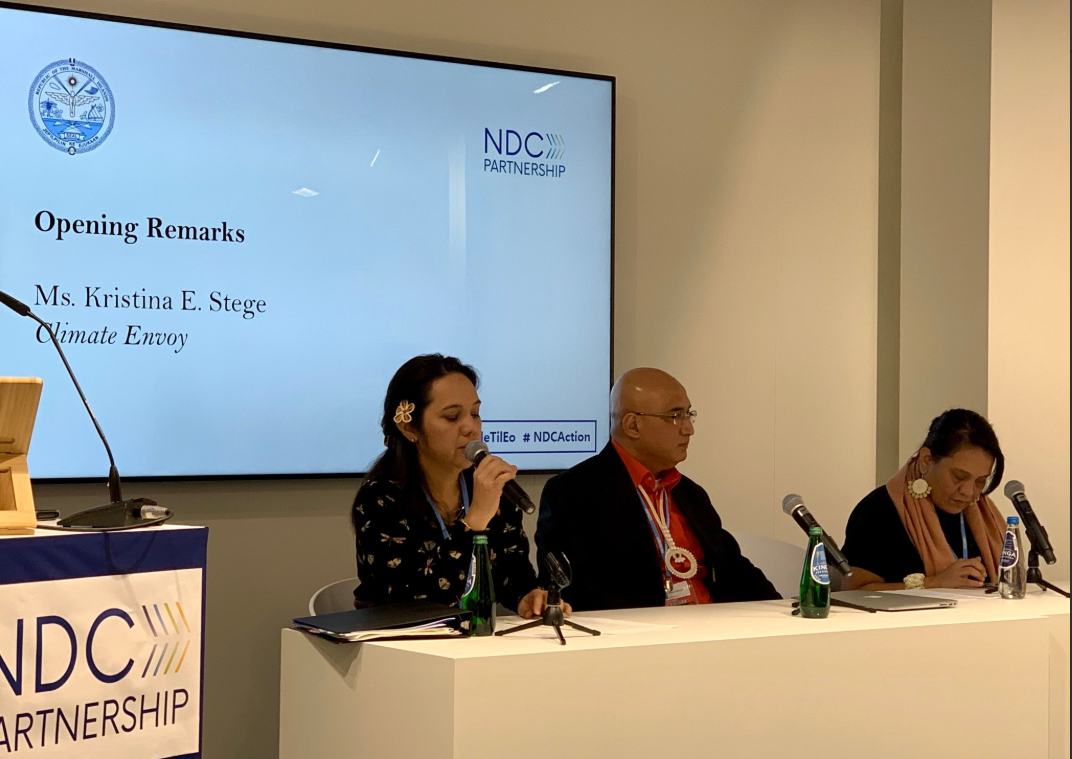 The Republic of the Marshall Islands’ Government collaborated with international partners to develop a Partnership Plan to accelerate on-the-ground implementation of its Nationally Determined Contribution (NDC) under the Paris Agreement. The Plan outlines immediate actions for the next few years on mitigation, adaptation and fundamental cross-cutting areas including gender, human rights and capacity building. The Plan is linked to the Marshall Islands’ 2050 Climate Strategy and second NDC and aims to turn the country’s high ambition into accelerated action, in partnership with the whole of government, whole of society, and the international community.

“The RMI is leading and lighting the way for global ambition on climate action,” stated Minister Paul. “We were the first nation to submit a second NDC, the first island nation to create a mid-century strategy, and we lead by example. We continue to lead the moral fight for accelerated action, because we are at the very front of the frontlines of climate impacts, which we can already see in our island nation today. However, high ambition only is not enough. We now need to see accelerated action on the ground – action in collaboration with all our people and in collaboration with international partners.”

The Marshall Islands’ NDC Partnership Plan, which is aligned with the country’s mid-century strategy and new NDC, is a results-based framework for the next few years. It outlines a total of six priority areas and 33 concrete actions, as well as clear roles for government agencies and development partners, all in one central matrix. The Plan turns long-term goals into concrete, immediate actions to accelerate NDC implementation in the RMI, and matches them with partner support.

The Plan’s key outcomes include:

The overarching output of the Plan is enhancement of the country’s NDC, because the Government expects that through implementing actions in the Partnership Plan – such as strengthening the greenhouse gas data system and convening more local climate dialogues – it will be possible to further enhance the Marshall Islands’ NDC, as well as increase community ownership and collective action.

During an earlier side event organized by the RMI Government at COP24, Climate Envoy Kristina Stege stressed the increased importance of adaptation in the Marshall Islands, “We want to highlight to our partners that we look to receive technical support and international expertise on assessing what our best long-term adaptation options are, to base our forthcoming National Adaptation Plan on. This should consider our culture, human rights of our people, gender, health, and food security.”

Angeline Heine-Reimers, the Marshall Islands’ National Energy Planner and the only woman in this position in the Pacific region, added, “It is very important for our country to put gender and human rights at the center of NDC implementation. For example, we have already started training women in the outer islands as solar technicians, but more work is required. As the country’s energy planner, I look to use the Partnership Plan as a tool to mainstream gender in the energy sector.” The Republic of the Marshall Islands also launched its Electricity Roadmap during COP24, laying out a comprehensive and cost-effective pathway for transformation of the electricity sector to 100 percent renewable.

Pablo Vieira, Global Director of the NDC Partnership Support Unit, congratulated the Marshallese Government on truly ‘lighting the way’ for other countries through its visionary leadership and high ambition. “I support your call for strengthened efforts on adaptation and resilience and on raising ambition for mitigation, and for partners, including members of the NDC Partnership, to support these specific needs, as has been outlined in the Partnership Plan,” he stated.

Minister David Paul holds the position as Chair of the Marshall Islands’ Tile Til Eo (Lighting the Way) Committee, the country’s inter-ministerial committee on climate change, which includes sectoral ministries including the Ministry of Finance. Over the past six months, following two national dialogues on climate change, the sectoral ministries and key stakeholders have undertaken internal consultations and deliberations resulting in the RMI Partnership Plan, which was shared with members of the NDC Partnership, and to which 15 partners provided an initial response indicating their support. These partners include: the Asian Development Bank, Climate Technology Center & Network, European Union, Food and Agriculture Organization of the United Nations, Germany, International Renewable Energy Agency, International Organization for Migration, Japan International Cooperation Agency, New Zealand, Regional Pacific NDC Hub, Pacific Community, Pacific Regional Environment Programme, UN Environment, the World Bank, and 2050 Pathways Platform. Some partners also indicated that they were looking to use the Partnership Plan as a tool for planning future support, which is encouraged by the Marshallese Government. “We also encourage new partners joining in, including the private sector, to review the matrix and discuss opportunities to provide support,” stated Minister Paul.

In November, the Tile Til Eo Committee signed off on its NDC Partnership Plan, indicating that the Plan will be an open and evolving matrix to which respective ministries can continue to provide updates, and partners can continue to join in with new targeted support.

“With partners’ targeted support to our immediate needs and gaps, we are confident that we can accelerate the implementation of immediate projects in the Partnership Plan – which collectively contribute to our long-term targets of net-zero emissions and 100 percent renewables – and that the RMI can therefore meet its high ambitions even faster,” concluded Minister Paul.

About the NDC Partnership

The Republic of the Marshall Islands was one of the first countries to join the NDC Partnership and is currently the developing island nation representative on its Steering Committee. The NDC Partnership is a global coalition of countries and institutions committed to ambitious action for climate and sustainable development. The Partnership has grown to include 87 member countries, 20 institutional members and nine associate members since its launch at COP22 in Marrakech in November 2016. NDC Partnership members work together to support 38 developing countries in implementing and enhancing their NDCs through technical and financial assistance, capacity building and knowledge sharing. For more information about the NDC Partnership, visit ndcpartnership.org.

Watch a recording of the Republic of the Marshall Islands Partnership Plan release at COP24.

For the Republic of the Marshall Islands:

Clarence Samuel, Director of the Office of Environmental Planning and Policy Coordination, clarencesam@gmail.com

For the NDC Partnership: