Over 2,300 people came to Libreville, Gabon between 28 August to 2 September 2022 for the Africa Climate Week (ACW), a platform for stakeholders to discuss regional climate action solutions and forge regional partnerships. There is no better place to host such an event than in Africa’s last Eden, Gabon, where 80% of the country is covered with forests which absorb 100 million tons of carbon dioxide a year. Africa Climate Week is an important step on the road to the UN Climate Change Conference COP27, which will be held in Egypt in November 2022.

Gabon has one of the most ambitious Nationally Determined Contributions (NDCs) in the world, with the country’s climate action plan outlining crucial steps to achieving its commitments to the Paris Agreement. “Gabon is a net positive country and is committed to remain carbon neutral to 2050,” said Professor Lee White, Gabon’s Minister of Water, Forest, the Sea and Environment, at the opening session of ACW. Throughout the week, participants enjoyed videos and photographs displayed in the many rooms at the conference venue, depicting the spectacular rain forests, amazing wildlife and fascinating art and culture of Gabon. The venue of the conference overlooked the Atlantic Ocean's spectacularly clean beaches – direct evidence of how seriously the country handles its environmental management.

I was part of the group of NDC Partnership In-Country Facilitators from Africa who attended ACW to share experiences and learn from the regional exchange sessions. Throughout the climate week, many new funding initiatives were launched, and panel discussions were held on a variety of topics. There were some interesting side events and several opportunities for networking and exploring collaboration beyond ACW. It was my first time to attend an ACW and here I share five reflections from the ACW which I took home. 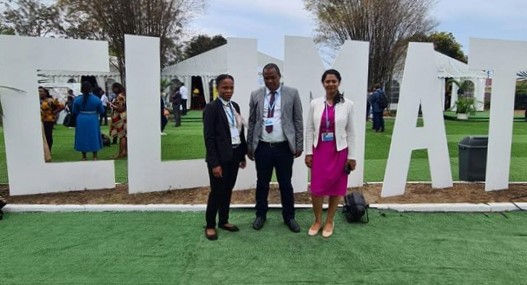 NDCs are the bridge between the Paris Agreement and Agenda 2030

There is growing recognition that countries, particularly in Africa, need to jointly advance the Agenda 2030 and Paris Agreement to bring both developmental benefits and climate resilience. The Sustainable Development Goals (SDGs) are integrated and indivisible, balancing economic, social, and environmental dimensions of sustainable development, while the Paris Agreement aligns with the 2030 Agenda and demands urgent climate action through the NDCs. Aligning the two can have a multiplier effect, reduce duplication and increase efficiency- maximizing resources, technical capacity, information, and expertise sharing. This is summarised best through the words of Inger Andersen, Executive Director of UNEP, who, during the ACW opening said: “Africa is at the forefront of the climate crisis, but it is also a place of immense potential for action…. With renewables and increased efficiency, we can reduce emissions, tackle energy poverty and air pollution. With nature-based solutions, we can restore ecosystems, build resilience against zoonotic diseases, floodings and heatwaves. By reducing food loss and waste, we can mitigate emissions and food insecurity, and reduce pressure on land and water resources." This statemen illustrates how climate action helps achieve SDGs and the right choice of SDG actions help achieve NDCs.

I attended several sessions discussing the Long-Term Low Emissions Development Strategies (LT-LEDS). The LT-LEDS is an instrument that illustrates how countries can decarbonize their economies in the long run, up to 2050 and beyond, against which shorter-term targets can be set through NDCs and NAPs. It is a crucial policy tool and can help to explore the consequences of policy choices in terms of integrated socio-economic objectives. The NDC Partnership announced their support for LT-LEDS at the ACW and will launch this support at COP 27.

During a panel discussion at ACW, delegates from Namibia-Mr Petrus Mateyauli, Kenya-Ms. Pacifica Achieng, and Nigeria- Mr. Huzi Mshelia talked about their journey to develop LT-LEDS and their country’s vision for a low carbon future. Kenya has kept her LT-LEDS as a living document to incorporate changes based on reviews on an annual basis. Most importantly, LT-LEDS should be country-owned, tailor-made, and forward-looking to allow countries to follow a low carbon and climate resilient pathway after toll that COVID-19 recovery has taken on many developing nations’ economy.

The NDCs and LT-LEDS are connected by aligning short-term climate action with long-term strategies, which can substantially shape countries’ short- and mid-term priorities, policies and investment pipelines, leading to significant cost reductions in the long-term. Linking NDCs to long-term mitigation strategies will be key in ensuring efficient use of resources, which is particularly crucial for responding to climate change amidst and following the COVID-19 crisis.

Just Transition- what does it mean?

The buzz word at ACW was “Just Transition” - with there even being a a session focusing on what Just Transition means to countries. The African Development Bank (AfDB) Group defines the Just Transition concept as a framework for facilitating equitable access to the benefits and sharing of the costs of sustainable development such that livelihoods of all people, including the most vulnerable, are supported and enhanced as societies make the transition to low carbon and resilient economies. A Just Transition affirms Africa’s right to development and industrialization based on the Paris Agreement-negotiated language of equity and the principle of common but differentiated responsibilities and respective capabilities, in the light of different national circumstances.

During a session at ACW, experts shared how African countries must chart their unique paths toward achieving a just transition, to assess the needs, challenges, and opportunities of implementing a just energy transition in Africa. “For us, a just transition is all about greening the economy in such a way that it is fair and inclusive, and that ensures the costs and benefits of the transition to low carbon and climate-resilient development are shared across the entire economy” said Kevin Kariuki, African Development Bank Group Vice President for Power, Energy, Climate & Green Growth. The consensus seems to be that, in Africa, the priority is to lift its people out of poverty foremost, while supporting environmental sustainability and inclusive economic growth. AfDB launched a Just Transition Initiative with funding from Climate Investment Funds (CIF) to develop a network of relevant stakeholders, partners and experts to discuss a just transition in Africa with an objective to create consensus and a way forward on the continent.

It is estimated that Africa will need USD 2.8trillion to implement NDCs between 2020 and 2030. Eswatini’s NDC implementation alone is estimated to cost between USD 950million to 1.5billion. African governments have committed USD 264 billion of domestic public resources, about 10% of the total cost. An additional USD 2.5 trillion must come from international public sources and the domestic and international private sectors. This external financial support, required beyond domestic public sources, is defined as climate finance need.

At ACW, climate finance was widely discussed and mentioned in almost every session. “It is not realistic to have climate action without considering the full context of the sustainable development agenda, poverty, hunger, employment and women empowerment. Mobilization of climate finance in Africa is crucial to create real progress in Africa.”, said COP 27 Climate Champion, Dr. Mahmoud Mohieldin.

The youth champion, Dr. Omnia El Omrani, called for creating green jobs for youth through climate finance and the importance of including youth in decision-making and innovative action, reminding the audience that “without urgent climate action, we [the youth] will continue to suffer the most”.

Road to COP 27 is “Action” and “Implementation”

NDCs and the Just transition to a low emissions economy were the major focuses of Africa Climate Week. The discussions and networking during the week helped delegates to share, listen to and learn from African countries ahead of COP27. One of the key outcomes of COP26 were the finalisation of the “Paris Rulebook”. As a result, the main theme of COP27 is the implementation of the Paris Agreement. At COP27, the focus on implementation will be evident through seven thematic areas, which range from renewable energy, sustainable cities and sustainable transport to water, nutrition and food systems. They will be organised in ten thematic days such as Finance Day, Decarbonisation Day and, for the first time, a Solutions Day.

COP27 must live up to its expectation because we have no time to lose, as evident by the recent drought in Somalia, heatwaves in Europe and flooding in Pakistan, climate change continues to wreak havoc around the world. We have a lot to do, and I left Gabon with the message that Africa will move forward with ambition, determination and hope towards a climate resilient future and will continue the discussions at COP27 to ensure that we foster ambitious action on climate change adaptation and mitigation.

Pictured: Gabon President Ali Bongo Ondimba (center) and other delegates at the opening of Africa Climate Week in Libreville.