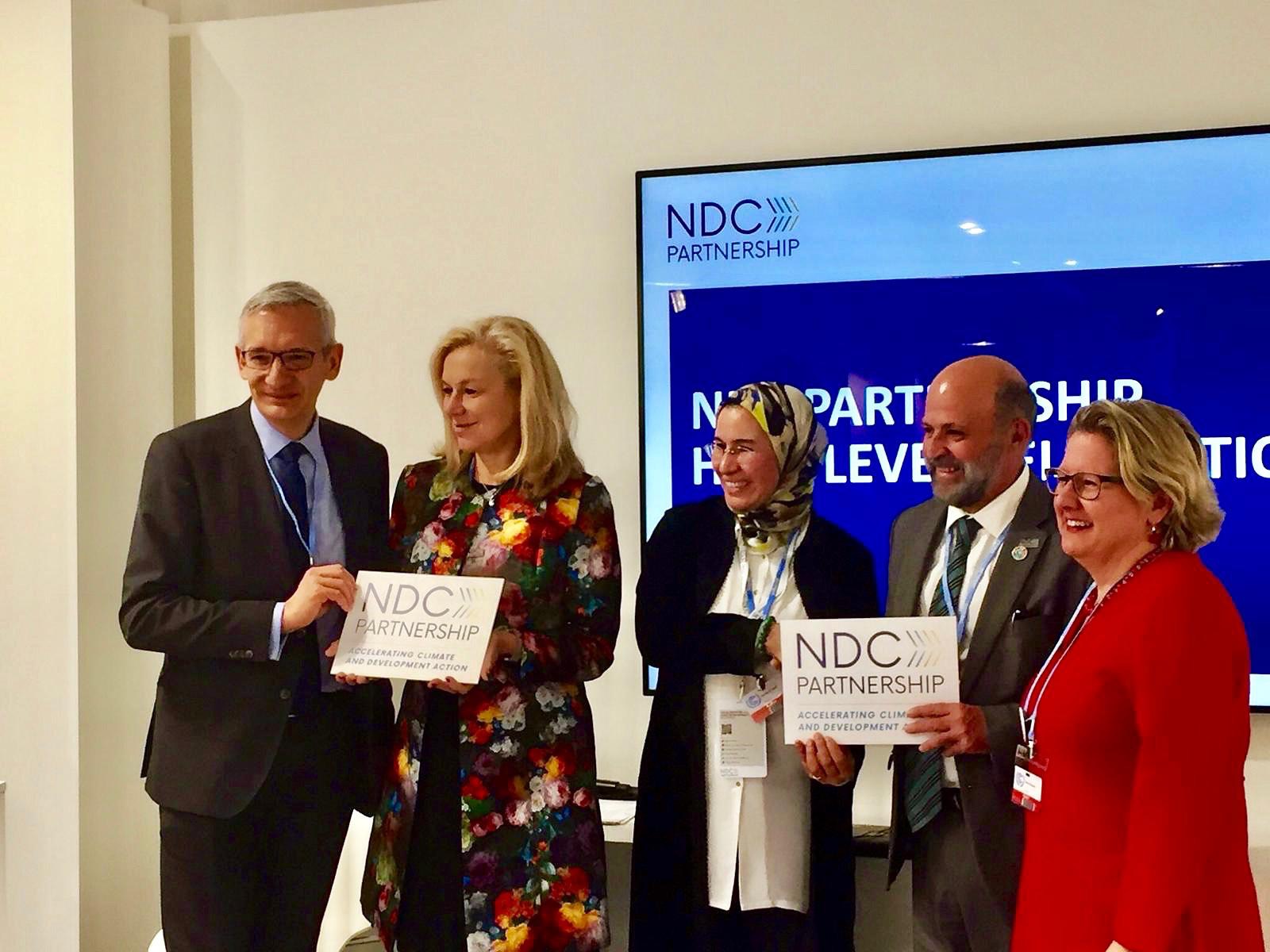 After two successful years of global, collaborative action to further the Paris Agreement on climate change by over 100 members, Germany and Morocco will hand over their role as NDC Partnership Co-Chairs, while remaining on the Steering Committee.

Katowice, Poland—At a high-level event on the sidelines of the United Nations Climate Conference COP24 honoring two years of collaboration to advance climate and development action, German State Secretary in the Federal Ministry for Economic Cooperation and Development Martin Jäger and Moroccan State Secretary in charge of Sustainable Development Nezha El Ouafi announced that the Federal Republic of Germany and the Kingdom of Morocco will be turning over their role as NDC Partnership Co-Chairs to the Republic of Costa Rica and the Kingdom of the Netherlands.

At the event, German Federal Minister for the Environment, Nature Conservation and Nuclear Safety Minister Svenja Schulze said, "The NDC Partnership is a successful forum for implementation. It is not about more negotiations, it is about action. It is about implementing the Paris Agreement at the country level. Countries in the NDC Partnership are supporting each other in implementing their NDCs. This is more than just financial support, it is a highly practical and trusting exchange. Many of us are struggling to implement our NDCs. But the NDC Partnership can help us deal with the challenge. It allows us to jointly drive forward implementation and to continuously raise ambition. This is why we today pledge an additional 20 million euros to the UN Development Programme for contributions to the NDC Partnership."

German State Secretary Martin Jäger said, "Implementing the Paris Agreement is not only imperative for securing a livable planet; it also is a great opportunity for sustainable development worldwide. The German government has been honored to co-chair the NDC Partnership during its first two years together with Morocco, and I am pleased to be able to pass on the torch today to strong champions of climate action: Costa Rica and the Netherlands. Germany will remain committed to our Partnership in the future. We are therefore providing an additional 48 million euros for joint action for NDC implementation."

Moroccan State Secretary Dr. Nezha El Ouafi stated, “COP22 opened as the COP of Action kickstarting the implementation of the Paris Agreement, and I cannot think of a better way to demonstrate implementation and cooperation between parties than this Partnership. In fact, one of the greatest achievements during COP22 was the launch of the NDC Partnership as an open and transparent platform, not only to facilitate NDC implementation, but also to strengthen the momentum of trust built around the Paris Agreement, and adopt an inclusive dialogue with international institutions and non-state actors. Today, there is significant progress as we moved from a membership of 40 initial members, to over 100 members. This is by itself an indicator of the Partnership’s success and demonstrates its priority. It has been a great honor and privilege to co-chair the NDC Partnership together with Germany, and Morocco stands ready to work with Costa Rica and the Netherlands as new Co-Chairs.”

Dutch Minister for Foreign Trade and Development Cooperation Sigrid Kaag and Costa Rican Minister for Environment and Energy Carlos Manuel Rodríguez were in attendance to accept the positions which run from 2019 to the end of 2020.

Costa Rica Minister Carlos Manuel Rodríguez stated, “The transformational change that we need to decarbonize our economies and to generate resilience requires a systematic and articulated approach. Only through a new way of multilevel multilateralism that allows countries, cities, companies and citizens to engage in climate action we, as a global community, will be able to achieve the Paris goals. The NDC Partnership is that, an alliance that allow us to innovate, collaborate, co-create and learn from each other to catalyze climate actions. We are honored and enthusiastic to co-chair the Steering Committee with the Netherlands, and very grateful to Morocco and Germany for their successes and previous guidance.”

Dutch Minister Sigrid Kaag said, “Under the leadership of Germany and Morocco, the NDC Partnership has grown rapidly and is showing good progress. We are now already engaged in 38 countries. In the next two years, I want to focus on mobilizing the required finance and to enable implementation of the climate action plans and investment plans. This is a collective effort. I look forward to working with Costa Rica to show the world that the Paris Agreement is attainable.”

Over the next two years, the NDC Partnership will build on the promising results it is already seeing in many of its member countries to catalyze climate action for low carbon and sustainable development – also in view of the UN Secretary General’s Climate Summit 2019. Partners will accomplish this through the Partnership’s three-pronged strategy of providing in-country technical assistance, mobilizing finance and sharing lessons learned across the globe. Developing and implementing Partnership Plans at the country level will be a centerpiece of these efforts.

Since its launch at COP22 in Marrakech, the NDC Partnership has grown to a membership of 87 countries, 20 institutions and nine associate members, working together to support countries in implementing their nationally determined contributions (NDCs) under the Paris Agreement. In that time, the Partnership has actively engaged in 38 countries to advance climate action and identify specific activities, needs and gaps to achieve countries’ goals. Through coordination and alignment of support, members of the NDC Partnership work together to leverage resources and achieve common objectives and priority actions identified by each government.

Kenya, for example, with Partnership support from Germany, the UNDP and others, consulted widely with different communities to develop a National Climate Change Action Plan that reflects and responds to climate issues at the ground level. Peru organized a wide series of consultations to advance a national Talanoa Dialogue called Dialoguemos to raise awareness and encourage a wider group of stakeholders to engage in efforts to combat climate change.

Countries are also now preparing to move from planning and programming to action on the ground. Costa Rica, for instance, has prepared an investment plan that organizes high-level needs to achieve its NDC, while also organizing the national banking system to integrate climate risks in investment decisions. In Rwanda, the Ministry of Finance and Economic Planning is preparing to take its NDC needs to bilateral negotiations with partners and to build a climate finance innovation unit to mobilize resources for NDC and climate action. Namibia worked with the Partnership to catalogue innovative projects necessary to address climate risks in its unique, desert environment.

And, with the promise of improved coordination, better planning and more efficient use of resources, countries are finding confidence to set sights higher and raise ambitions in line with the targets of the Paris Agreement. Uganda, with support mobilized and coordinated through the Partnership, is looking to achieve targets set for 2030 now in 2020, accelerating its pace of achieving long-term climate targets. And, more development partners are creating dedicated programs to support this work. Germany, the Netherlands, France, Belgium, the African Development Bank, the European Bank for Reconstruction and Development, UNDP and the World Bank Group are all but a few that have specific programs to support technical assistance or project finance needs to advance NDC implementation.

More details about the NDC Partnership’s work can be found in its 2018 report, Partnership in Action: Two Years On.