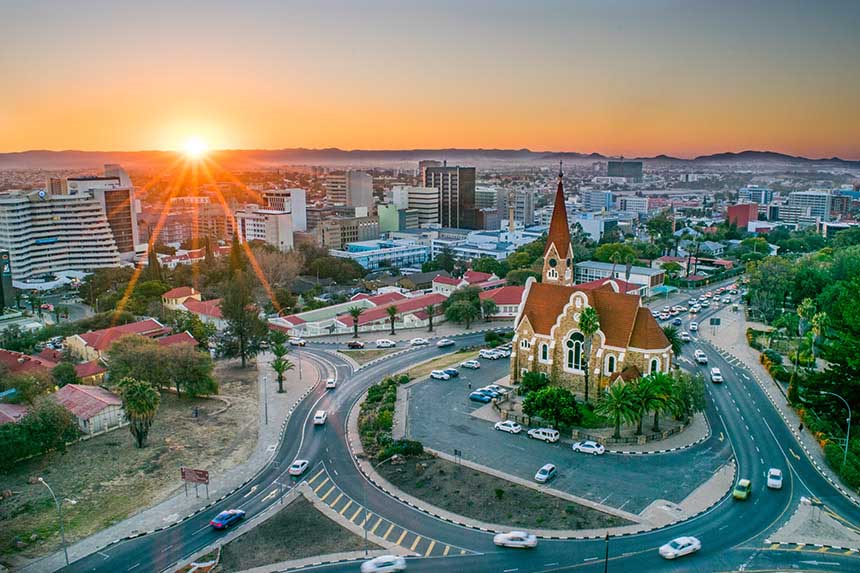 Unprecedented, global and highly complex. Climate change has led nations to 25 years of negotiations in search of a response to one of the most threatening challenges of our time. The solution they devised, however, looks rather simple once fitted into its three-letter acronym: NDC. Nationally Determined Contributions (or NDCs) are key to the success of the 2015 Paris Agreement on climate change, which invited countries to proactively adopt and submit their individual commitments, with consideration for national circumstances, to address the challenge. To put the agreement into practice and support countries in the implementation of their NDCs, a global alliance of over 60 nations (co-chaired by Germany and Morocco) and nine international institutions (including United Nations agencies and multinational development banks) gave rise to the NDC Partnership.

The Southern Times interviewed Pablo Vieira, Global Director of the NDC Partnership’s Support Unit, which is responsible for leading efforts to support countries in advancing their climate goals by facilitating access to analysis, tools, expertise, financing and other resources through its vast international network. Pablo is a leading figure in environment and sustainable development in his native Colombia. Before joining the NDC Partnership, he served as Advisor to President Juan Manuel Santos, managing Colombia’s accession to the Organization for Economic Cooperation and Development (OECD) and supporting the implementation of commitments on the environment and climate change. In 2013, Pablo was appointed as Deputy Minister of Environment and Sustainable Development. Through the NDC Partnership Support Unit, he now facilitates global efforts to build momentum for climate action.

In this interview, Mr. Vieira explains what the NDC Partnership hopes to accomplish; discusses how African governments can learn from one another; and compares international efforts to the Ubuntu philosophy: “I will be because we will be.”

Southern Times: Please give us a brief overview of the NDC Partnership in Namibia.

Pablo Vieira: NDCs (or Nationally Determined Contributions) allow each country to determine its own contribution to tackle climate change within the framework of the Paris Agreement to spur action, stop global warming and prepare for the impacts of climate change. Because NDCs are a country-driven process, the NDC Partnership also relies on a country-driven model. In Namibia, this means we work closely with the government and local stakeholders to identify ways to address the pressing needs of the country, such as drought, water scarcity and food insecurity – all of which are threats exacerbated by climate change.

Namibia developed an ambitious NDC aiming to reduce 89 percent of greenhouse gas emissions by 2030 compared to business-as-usual levels. It aims for a future of economic growth accomplished through low carbon emissions and sustainable development. Solar energy, eco-tourism in the Savannah, financing for the protection of ecosystem services and forests are just a few examples of areas where Namibia’s economy can grow through smart climate policies.

The challenge here is not different than in the rest of the world: to align the climate action agenda with national development plans, including Vision 2030, NDP5 and the Harambee prosperity plan. To assist, the Namibian government has named focal points to the NDC Partnership in both the Ministry of Environment and Tourism and the Ministry of Finance. We consider this a very good start.

S.T.: As an organization, what would you say are your major milestones in Namibia and in countries of the Southern African region where the NDC Partnership is engaged?

P.V. - We are a young alliance, having started less than a year ago, that is working towards long-term goals. Namibia is an early member, and we have begun intense discussions, primarily with government stakeholders. So far, I think we have been successful in raising awareness across the government that climate change is relevant to many sectors, not just the environment. We are about to develop a joint work plan with members of the Ministries of Finance and the Environment, which will be a major milestone in implementing the country’s NDC.

On 12-13 October, we will be present at the High-Level Forum being hosted by the Government of Namibia, the Southern African Development Community (SADC) and The Southern Times. This will be an important opportunity to move plans forward.

S.T.: What role does your organization play in terms of stimulating debate from different stakeholders on the issue of climate change?

P.V.: We are a connector. We bring together developing and developed countries, international institutions and non-state actors. Any country or organization can voluntarily become a member. Our core principle is to support country-driven processes that promote climate action in line with sustainable development. We are not telling anyone what to do; we work towards solutions from the needs the country identifies.

We are also a matchmaker. We match national projects to international partners who can assist, drawing from the global network of the NDC Partnership. We engage in three primary areas: technical assistance in country, knowledge sharing and enhancing financial support.

S.T.: As part of your mandate to improve learning and collaboration on the different issues you are involved in, how do you view the success rate in Sub Saharan Africa?

P.V.: It is not entirely fair to measure the success of the entire region, because it requires us to dismiss the diversity of realities here. Also, it is very early in the process – implementation of NDCs and the Paris Agreement have only just begun. What we can readily see is high awareness and engagement throughout Sub Saharan Africa, where climate change has already been felt through droughts, water scarcity and extreme weather events.

Regional institutions and initiatives will be critical to catalyse cross-border learning, identify common narratives and share best practices. For example, the Southern African Power Pool has succeeded in promoting cross-border cooperation in energy distribution, which has led to a large reduction in energy losses and increased the stability of networks. Mali is developing NDC compatible sectoral development plans, something that many countries will be interested in doing to implement their NDCs. In Uganda, we are helping to develop a system of tracking expenditures and resource needs for climate related projects, and look forward to sharing this experience with other countries that need to match budgets and funding for NDC action.

S.T.: Funding has been a major curtailing factor in combating the effects of climate change in the region. How do you propose addressing this challenge?

P.V.: I appreciate this very important question. Indeed, financing has been one of the biggest challenges of climate negotiations since the start of the United Nations conventions, in 1992. And it is a big reason why the NDC Partnership was created. We are a matchmaker between country needs and international financial institutions and donors.

Last November, the Namibia Environmental Fund was the first institution to get direct access to the Green Climate Fund, which enables it to carry out climate activities owned and managed by Namibian communities. We are also counting on other partners, like the Development Bank of Namibia and the African Development Bank, and the private sector. We must modernise the entire financial architecture around climate action to make these policies work.

S.T.: How have you managed to support long-term plans especially in countries in the SADC region to confront the challenges of climate change?

P.V.: Long-term plans should be designed by countries to accelerate climate efforts and increase ambition. The Paris Agreement establishes a review of all country NDCs by 2020, and countries are expected to present more ambitious commitments by then. To do that, they need to feel empowered and capable. This is an urgent goal, because with no further action, the world is headed towards catastrophic vulnerability.

And we must empower countries not only to scale up ambitions, but also to keep their commitments. These commitments must be more important than whoever wins the next election and whichever political party is in power. If we learn and are inspired by places where transformation is taking place, I am confident that future governments will realize how vital it is to national interests to increase the momentum on climate action.

The NDC Partnership is creating a network of shared experiences and mutual learning among countries. Countries from Southern Africa will be a critical source of valuable experiences and will also benefit from these exchanges as well. The forthcoming Forum serves this role: we will not only bring in SADC neighbours, but we have also invited high-level representatives from Ghana and Morocco to share their experiences, to further stimulate a South-South exchange.

S.T.: How active are African governments in terms of coming up with action steps and laws that promote planning to combat unforeseen circumstances such as drought and floods largely associated with climate change?

P.V.: African governments have been very proactive in planning and policy making, perhaps because leaders recognize that Africa is on the front lines of climate change. Namibia, for example, has strong laws to protect the environment. Environmental protection is even written into the Constitution. Besides planning and creating policies, African governments have also started to implement. The Adaptation of African Agriculture Initiative is working with Mali, Cote D’Ivoire and Morocco to develop Climate Smart Agriculture investment plans. Through Morocco’s Center for Climate Change Competence (4C Maroc), they are also sharing lessons learned on financing climate projects with government counterparts throughout Africa.

However, we surely agree that more can be done. For instance, flood proof roads are one kind of investment that can prove economically advantageous in the long run, despite higher upfront costs. There is also space to create more insurance mechanisms, such as the African Risk Capacity, to protect the most vulnerable populations – like farmers and the rural poor – in times of crop failure.

S.T.: Do you feel African countries have enhanced their quest to fight climate change effects through their national plans? Please also speak in relevance to Namibia.

P.V.: This is not exclusive to African countries. NDCs were created quickly by many countries in the runoff to the historic Paris Climate Summit in 2015, and there has not been time for most countries to align their climate agendas with their national plans yet. But strong alignment between climate and development agendas is a goal all countries must strive to achieve.

Namibia has implemented development policies which embed climate awareness: Power Purchase Agreements (PPAs) have increased energy production and reduced dependence on imports; and building up renewable energy sources is improving energy access in rural areas. Climate Smart Agriculture has been an opportunity to enable food security. Finally, policies that protect forests are helping Namibia to adapt to the effects of climate change, while preventing further environmental damage, and creating jobs. These are powerful and timely initiatives, which are needed across development planning – not only vaguely mentioned in the environment section, as we have been used to seeing globally.

We want Namibia to be a source of encouragement for other countries of the world. Keeping its commitments, mainstreaming climate action, strong governance and demonstrating real success will be what is needed to spur momentum for further climate investments and scaled-up ambitions.

Ubuntu’s principle “I am because we are” is an inspiration that asks us all to act in favour of a greater outcome than any one person or country can claim. Our vulnerable planet has already blurred lines, divisions and borders – climate refugees are one of the most visible examples of this. We are being called to act on behalf of the whole. This is why the NDC Partnership is a multi-stakeholder engagement and why we want to work with partners all across the region in collaboration with governments. As we head into the future, we will uphold the belief, “I will be because we will be.”