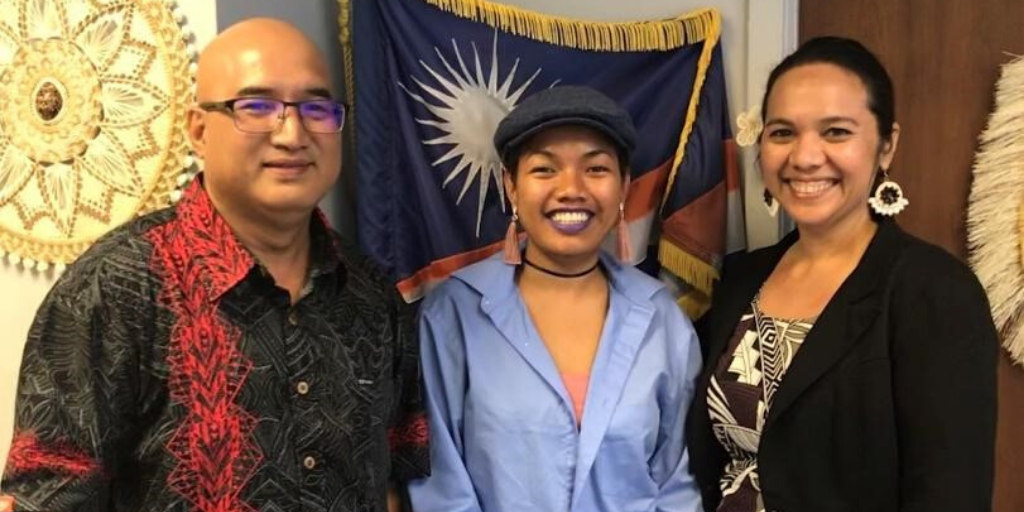 In the run-up to the UN Secretary-General’s Climate Action Summit in September 2019, the NDC Partnership supported three member countries in their roles as co-leads for thematic tracks of the summit: Kenya (Infrastructure, Cities and Local Action), Jamaica (Climate Finance and Carbon Pricing), and the Marshall Islands (Youth and Public Mobilization). The Partnership provided support through strengthening capacity in capitals and at permanent UN missions in New York, by embedding local experts in the teams in charge of preparing the summit. We sat down with Kristina Stege and Selina Leem from the Republic of the Marshall Islands right after the summit in New York, to discuss what the Marshall Islands sees as the summit’s key outcomes in the youth engagement & public mobilization track, and how we can take these outcomes to the country level, linking them with ongoing NDC Partnership processes.

The Marshall Islands collaborated with co-lead Ireland on the “Kwon-Gesh” climate pledge. “This means “solemn duty” in a combination of Marshallese and Gaelic language,” explains Climate Envoy Kristina Stege. “We are asking governments to sign on to meaningful youth engagement in climate change decision-making at the national and local level.” As the pledge states, “signatories should, when taking action to address climate change, respect, promote and consider their respective obligations on youth, as well as intergenerational equity.” National and sub-regional governments can continue to sign up by contacting YouthPledge@dfa.ie and RMIClimateEnvoy@gmail.com.

The Marshall Islands has already started implementing the Kwon-Gesh at the country level. Supported by the International Organization for Migration (IOM), last summer’s youth leadership camp resulted in a youth-led declaration that called for a “youth parliament” that has an open session on climate change. Ireland is already undertaking a similar initiative, and the Marshall Islands and Ireland are looking to explore possible continued collaboration between the two countries, including peer exchanges between youth. As NDC Partnership Focal Point and Director of the Office for Environmental Planning and Policy Coordination (OEPPC), Clarence Samuel adds: “The government is already actively including young people into climate action decision-making and implementation in the Marshall Islands. In the past two years we have organized, with support from the NDC Partnership and the 2050 Pathways Platform, climate change dialogues in Majuro and Ebeye, with very strong participation of youth and students from all ages. In 2018, we collaborated with the Partnership to develop our NDC Partnership Plan, outlining key priorities and gaps in support for climate change mitigation, adaptation, and cross-cutting actions, for partners to support. Youth is included as an important cross-cutting area in our Plan and in our current internal coordination structure for climate and resilience activities. For example, on adaptation, we are working on our National Adaptation Plan (NAP) – also referred to as our “National Survival Plan” – and have recently formalized the regular participation of a youth representative in the weekly meetings of the Adaptation Working Group in charge of developing the NAP.”

One key regional initiative coming out of the summit is the Pacific Arts and Climate Change Program, a project to be implemented with SPREP, partners in Tuvalu and Kiribati, and the Marshallese youth-led organization Jo-Jikum. The objective of the multi-country project is to amplify the voices of frontline youths and their experiences with climate change, and to support infrastructure and locally based solutions within impacted communities in the atoll nations of Kiribati, Marshall Islands and Tuvalu. The expected outcome is for youth from some of the most vulnerable nations to contribute to the movement on climate change, have their voices heard, contribute to global conversations on climate change, and develop locally sourced climate resilient strategies to share with their communities. The Marshall Islands is currently looking for partners to contribute to the financing of this project and is including this in its updated NDC Partnership Plan as well. “This project will also contribute to strengthening of social cohesion,” says Selina. “Art and poetry help young people in our country cope with trauma and anxiety. Climate change is an existential threat to our country, our culture, our heritage, and our people. Imagine the burden we are carrying with us every day, as we see the sea level rise and the ocean slowly taking our land.”

During the NDC Partnership’s first country dialogues in the Marshall Islands in July 2018, Marshallese poet Kathy Jetnil-Kijiner – who spoke at the UN Climate Summit in 2014 – founder of Jo-Jikum and currently the other Marshall Islands Climate Envoy, brought a group of her poetry students to perform spoken word and music about climate change. One of those students was Nenol, who is based in Majuro and currently leads IOM’s work on youth advocacy and the youth leadership dialogues.

Other results of the youth and public mobilization track of the summit include the first-ever UN Youth Climate Summit that took place two days before the Climate Action Summit, highlighting the importance of intergenerational partnership and embracing the strong spirit of the new generation. Among the thousand youth summit participants was a group of Marshallese youth, and H.E. President Hilde Heine made sure to sit down with them to discuss climate action in the Marshall Islands. Other impactful initiatives from the summit to strengthen youth and public mobilization included “Playing for the Planet”, a partnership with UNEP and the gaming industry that plans to use games and for example virtual environments to raise awareness of climate change. Something the Marshall Islands would particularly like to see included here are the true frontlines of climate change – atoll nations such as the Marshall Islands, Kiribati, Tuvalu and the Maldives. That way youth and other gamers could live the reality these islanders are living every day: “the sea level is rising, and so are we.”

As Kristina and Selina reflect back on their intergenerational collaboration for the summit and the way ahead to ensure the summit’s outcomes and initiatives will make a real difference for people on the ground, they once more stress the importance of giving youth a meaningful voice and space in the climate change conversations. “As we were co-leading on the youth track of the summit, it made all the difference to have an actual youth representative here with us in person,” states Kristina, “and it is not something you see a lot.” “Selina brought a very critical perspective to the table, as well as a lot of creativity, which really added value to our work. Moreover, Selina actually enabled a lot of other Marshallese youth to participate, as she took on the work of arranging their logistics for coming to New York and to the summit’s preparatory conference in Abu Dhabi. In addition to logistics, she was also truly there for them as they got to New York and could play a peer mentoring role. It is really important for smaller countries, including Small Island Developing States (SIDS) that are most directly impacted by climate change and are truly on the frontlines, to be able to play such leadership roles for these international climate meetings. However, it is important to understand the very real capacity challenges we are facing. There are only a handful of staff at the Marshallese mission in New York, and it would have been impossible to add extra work to their existing workloads. Therefore, the quick support we received from the NDC Partnership enabled us to make most of our role as co-lead.” To that Selina adds: “There were also a lot of challenges for me as a young woman to navigate this particular environment, from how to speak to how to dress… But it was very important for me to see how Tina represented our country and be able to learn from her mentorship. Such women leadership in the global climate change conversation, in particular from countries at the frontlines, is critical, and I’ve now seen that it’s possible.”

Before returning back home, Selina ended her time in New York on a high note, as she was invited to take the stage at the Global Citizen Festival together with climate activists Alexandria Villaseñor, Xiye Bastida, and Leonardo DiCaprio. There she spoke in front of an audience in Central Park equaling the population size of her country, on the reality of climate impacts and the importance of urgent climate action taken by everyone.