Bringing Global Outcomes of the Climate Action Summit to the Country Level: Jamaica 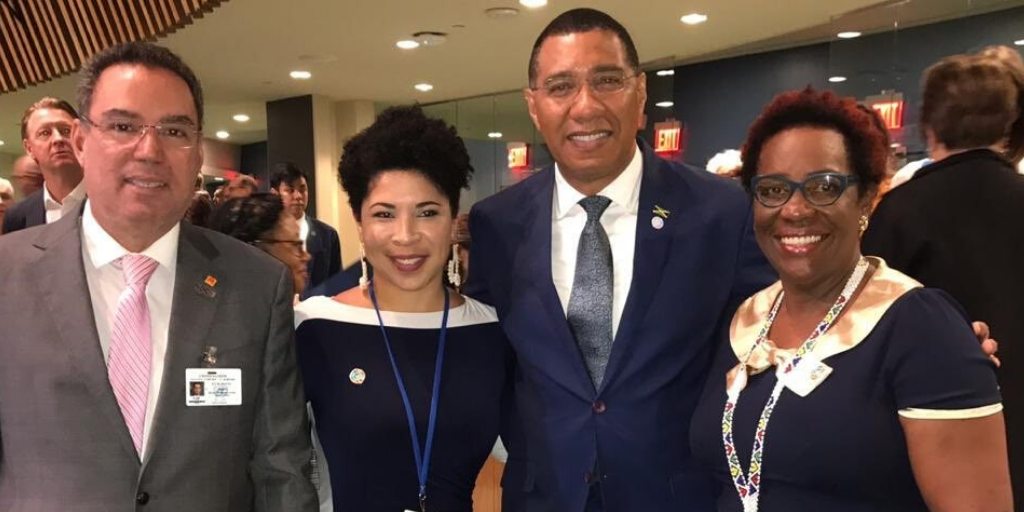 In the run-up to the UN Secretary-General’s Climate Action Summit in September 2019, the NDC Partnership supported three member countries in their roles as co-leads for thematic tracks of the summit: Kenya (Infrastructure, Cities and Local Action), Jamaica (Climate Finance and Carbon Pricing), and the Marshall Islands (Youth and Public Mobilization). The Partnership provided support through strengthening capacity in country and at permanent UN missions in New York, by embedding local experts in the teams in charge of preparing for the summit. We sat down with Anaitée Mills after the summit in New York, to discuss what she sees as the summit’s key outcomes on the climate finance and carbon pricing track for Jamaica, and how we can take these to the country level, linking them with ongoing NDC Partnership processes.

One of the most critical and cross-cutting thematic tracks of the UN Climate Action Summit was the area of climate finance, co-led by the governments of Jamaica, France, and Qatar. After spending almost 10 years at the Inter-American Development Bank both in the areas of Energy and Climate Change, Anaitée Mills took on the role to support the government of Jamaica for the preparations of the summit as part of the Prime Minister’s Support Unit and in close collaboration with the country’s Climate Change Division. She is now looking to bring some of the concrete initiatives back to Jamaica and the larger Caribbean region to make progress on implementation and scaling up of climate action.

“There are several concrete items coming out of the summit that Jamaica can take immediate action on,” states Anaitée. “In response to Jamaica’s own national priority to increase adaptation and resiliency, we are looking to collaborate with the Climate Resilient Investment Coalition, an outcome of the Adaptation and Resilience track of the Summit, which is looking to strengthen the market for private and public sector investment in climate resilient infrastructure, reduce climate risk,  and support climate vulnerable geographies to attract investment and prevent capital flight as climate risks become more evident. By serving as one of the pilot countries, Jamaica will gain valuable analytical data and research that will allow the country to optimize the integration of climate risk for financial institutions.  Through this collaboration with the United Kingdom and other key players, we will be looking at pricing and redistribution of risk. This should lead to important findings for investment in resilience that can be applied and scaled in other countries in the region as well.”

“Another important initiative that Jamaica has joined is the Risk-Informed Early Action Partnership, which seeks to greatly expand early action-financing and improve early warning systems and the capacity to act on the risks identified. By joining these types of initiatives, I believe Jamaica will be advancing greatly in understanding and identifying risks and also implementing more early warning systems for key sectors that are urgently needed. It was also evident from the discussions surrounding the global financial system that governments must take action at the local level to bring the private and public financial institutions into the climate conversation. This is where initiatives such as Greening the Financial System, Principles of Responsible Banking and the Coalition of Finance Ministers for Climate Action come into play. I think one of the actions to take would be to develop a roadmap for the financial sector at the country level to start the implementation of voluntary tools for risk disclosures to incentivize climate-responsible investment, and eventually transition to actual regulations that lead to the enforcement of these incentives within Jamaica´s banking sector. It will be key to involve the Ministry of Finance to help bring domestic banks in this conversation, as they need to be able to get on board. And last, there is no climate action conversation that is not immediately associated with finance and the ability of resources to reach the most vulnerable. Jamaica’s is involved in initiatives such as the Closing the Investment Gap and the Climate Investment Platform, which seek to mainstream efforts to enhance the “bankability” of projects in critical areas for mitigation and adaptation, and streamline connections between countries and partner institutions. In summary, we will be following up on these and many other pledges and commitments made during the summit, to make sure they deliver the transformative changes that are needed on the ground, in particular in Least Developed Countries (LDCs) and Small Island Developing States (SIDS), as we are already seeing the negative effects of climate change, and we need real change right now. The outcomes of the UN Climate Action Summit are truly transformational – if they get implemented on the ground.”

In stepping up to climate action, it cannot be underestimated or ignored that the private sector is and will be a key driver of the low carbon and climate resilient transformation. For that reason, just weeks after the UN Climate Action Summit, the Prime Minister of Jamaica provided the keynote remarks at the Green Climate Fund (GCF) Private Investment for Climate Forum, building on some of Jamaica’s key messages at the UN Climate Action Summit, in particular the urgent need to raise private capital for climate-resilient and low-carbon investments in countries that are experiencing economic challenges and fiscal constraints. “Jamaica took the role as co-lead in Climate Finance very seriously and has gone further in signaling the international market for increased climate investment by announcing the approval of technical assistance through GCF’s Readiness Program to support the development of the first ever Caribbean Green Bond to be listed on the Jamaica Stock Market. Undoubtedly, Jamaica is making strides to solidify its relationship with the GCF, having also played an active role in encouraging developed countries to contribute to the GCF replenishment by co-hosting with the Prime Minister of Norway a high-level luncheon prior the UN Climate Action Summit, which generated more momentum in preparation to the GCF pledging conference recently held in Paris”.

Jamaica has committed to raising the ambition of its Nationally Determined Contribution (NDC), and with support from the World Bank and the NDC Partnership’s Climate Action Enhancement Package (CAEP), the country is currently undertaking the assessments necessary to determine how much and in which additional sectors higher emission reduction targets can be set. Once the NDC has been updated and enhanced, Jamaica will develop its NDC Partnership Plan, or NDC Investment Plan. “After doing the assessments, setting the targets, and developing the enhanced NDC, it is key that we move towards investment planning and turn the NDC into a portfolio of investable projects. The NDC is a means to subsidize economic growth of the country – in a sustainable, long-term, and low-carbon way. By including more sectors in the NDC, there will also be more investment and sustainable growth opportunities. On the ground, Jamaica’s Climate Change Division has been pivotal in creating the right mechanisms for sector inclusiveness through its Climate Change Focal Point Network. Another step that would make a real difference for NDC implementation and climate finance is active involvement of the Ministry of Finance. The role of the Ministry is key in accelerating climate finance and NDC implementation, which is why Jamaica has now also formally joined the Coalition of Finance Ministers for Climate Action and encourages other countries to join too”.

Reflecting on the lessons learned, Anaitee further shared, “Something we realized when I joined the Jamaica Summit Team is that there is a very strong need for more technical people to be part of these discussions and preparations. If you look to what has been happening since the UNFCCC Conference of the Parties (COP) in 2015, we have started moving into the implementation phase of the Paris Agreement and NDCs. For this, we need more than diplomacy limited to the hallways of the United Nations. We need local technical experts to be part of the planning and preparatory discussions for the Climate Action Summit and other international engagements key to climate action beyond the COP – this is critical for turning higher-level conversations into feasible implementation. Moreover, one extremely positive aspect was the combination between countries and regions in the co-lead roles for the UN Climate Action Summit. This element brought balance and perspective into the discussions, as it happened within the Climate Finance and Carbon Pricing track through the collaboration of Jamaica with France and Qatar.

Further insights from Ms. UnaMay Gordon, Director of Climate Change, confirmed Anaitée’s assessment: ”We must make sure that these models work well for developing countries, as oftentimes smaller countries such as Jamaica are very stretched in terms of having the available dedicated experts to respond to the high workload and follow-up that is necessary to take on the role of a co-lead country for a particular area of a global summit. In that sense, our collaboration as Government of Jamaica with the NDC Partnership was critical in meeting the country’s responsibility under the UN mandate and be able to benefit from its immediate outcomes. In looking into the future of these type of international platforms and high-level dialogues, and all subsequent discussions on NDC implementation, it would be good to carefully incorporate such considerations from the start, to ensure equality and empowerment, leading to true participation and partnership.”