The Government of Zimbabwe is acutely aware of the threats to human and environmental health and development as a result of climate change and has worked steadily to create the foundation for a consistent response. The Government has elaborated a Climate Response Strategy and Climate Change Policy and has submitted its first NDC to the United Nations Framework Convention on Climate Change, which focuses primarily on the energy sector, seeking to reduce energy-related emissions by 33 percent below projected business-as-usual emissions by 2030. An adaptation component of its NDC also focuses on Climate-Smart Agriculture. Moving forward, the Government is broadening the scope of its climate agenda and planning for the long term through its NDC Implementation Framework, Low Emission Development Strategy (LEDS) 2050, and the development of a National Adaptation Plan. Zimbabwe is consolidating its three-year results-based Partnership Plan, the development of which was led by the Zimbabwean Government with the engagement of eight Ministries and 20 development partners. The Plan translates sectoral priorities into concrete outcomes and outputs, connecting them with development partner resources for mitigation and adaptation actions while strengthening the whole-of-government approach and improving donor coordination. Multiple stakeholders are engaged in the Plan’s development, including the private sector, civil society, Government organizations, and development partners.

Ministry of Lands, Agriculture, Water, Climate, and Rural Resettlement and Ministry of Finance and Economic Development

Stage 3: Design of the Partnership Plan 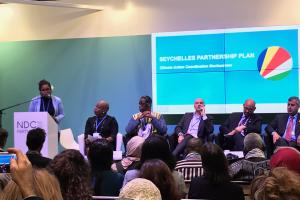