Participants at the São Tomé and Príncipe Partnership Plan Workshop.

São Tomé and Príncipe is one of the smallest countries in Africa and aligning environmental conservation and human development is at the core of the country’s development challenges. Despite its small population – less than 200.000 inhabitants – its issues can be highly complex. Like other Small Islands Developing States (SIDS), rising sea levels and extreme weather events pose a real threat to people’s well-being. Changing climate patterns also affect the country’s development and represent real threats to sectors such as agriculture, tourism, and fisheries.

In this context, the country is currently moving from intention to implementation, and is working on how to best translate its NDCs into real actions.  This central question raised constructive debates at the Partnership Plan workshop held on 19 – 20 April. The diverse contributions from over 50 participants, including UN agencies, multilateral development banks, non-governmental organizations (NGOs), and the government - from the ministerial to the technical level, -  led to concrete decisions to address climate change through the country’s Nationally Determined Contribution (NDC) for climate action. These discussions will contribute to the elaboration of a comprehensive action plan (Partnership Plan) to implement São Tomé and Príncipe’s climate commitments while promoting sustainable development.

Together, the participants in the workshop, hosted by the government with support from the NDC Partnership, identified more than 60 specific actions on adaptation, mitigation, and crosscutting topics. Among them are policies, national strategies, regulations, technical and feasibility studies, and investment projects focusing on reducing climate-related risks and increasing the resilience of communities and economic sectors, increasing the production of energy through renewable sources, and creating socioeconomic alternatives for deforestation and forest degradation. On crosscutting issues, the participants emphasized the need to reinforce coordination mechanisms within the government and with development partners, and the institutional capacity of the Climate Change National Committee, as well as increase national capacities for accessing and managing international finance and monitoring, reporting, and verification mechanisms.

In his opening speech, the Minister of Infrastructure, Natural Resources, and Environment, Carlos Vila Nova, talked about the effects of climate change in his country and reminded attendees that international support is fundamental for NDC implementation. “Even though we are a carbon sink, we are willing to reduce our emissions, and for that, we need partners’ contributions,” he said. São Tomé and Príncipe has committed to reducing emissions by 24 percent in comparison to its business-as-usual scenario, which is aligned with its national development strategy. The country is proposing solutions, such as building hydro and solar plants, so that it has the chance to overcome its dependence on imported fossil fuels, whose prices represent a high burden to the country’s budget, a barrier to economic development, and a contributing factor to social inequality. Zahira Virani, UN resident coordinator in the country, reinforced that “we are not here for a parallel agenda; we must see climate as part of the development strategy.” 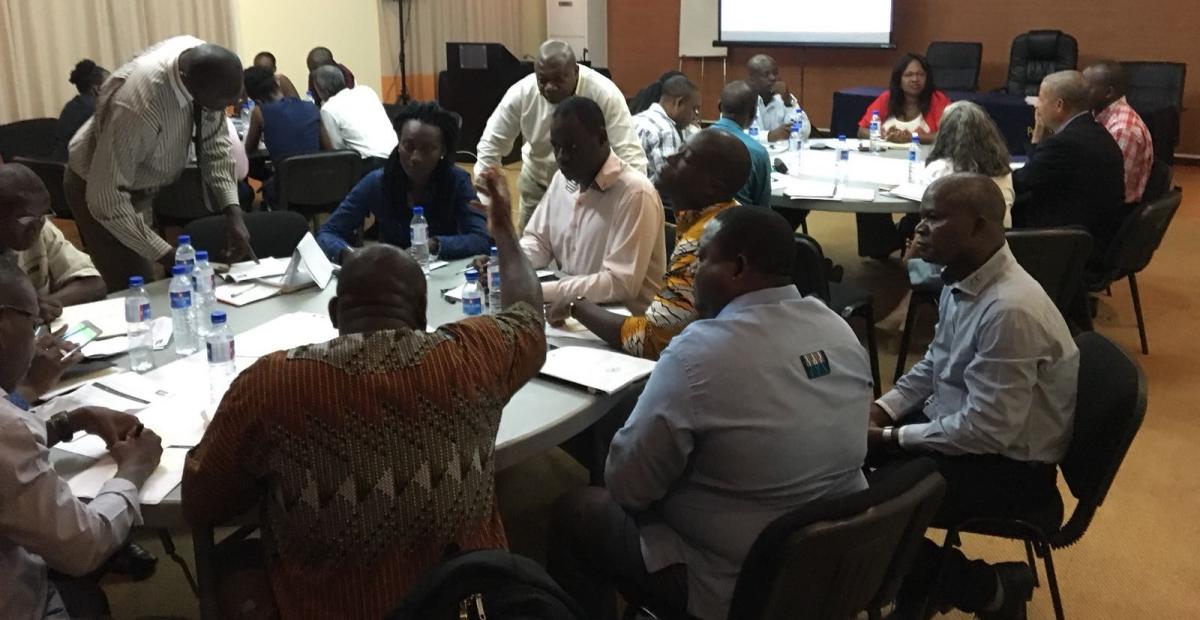 Participants engaged in discussion during the Partnership Plan Workshop.

Based on comprehensive exercises from the workshop and previous initiatives in the country, the NDC Partnership, under the leadership of the Government, is now moving to support coordination of international partners’ current and planned activities in the country. As São Tomé and Príncipe’s NDC is entirely reliant on international support to be implemented, coordinated efforts through the NDC Partnership offers the country a strategic way to harmonize and scale up climate actions.