Vietnam is regarded as one of the countries most severely affected by climate change: extreme climate events have become more frequent and more intense; its average temperature has increased by about 0.5 degrees Celsius; and its sea level has risen by approximately 20 centimeters, which is particularly disconcerting because of its 2,000 miles of coastline. These impacts present clear challenges for the Vietnamese – especially in the Mekong River Delta region, a crucial hub for food production. The Government is keenly aware of its vulnerability but, how does Vietnam, a country with continued development needs, approach such challenges?

In 2009, Vietnam established the ‘Support Program to Respond to Climate Change,’ a mechanism for accepting international climate financing. In 2016, it ratified the Paris Agreement on Climate Change to mark its commitment to reducing global greenhouse gas (GHG) emissions and pursuing adaptation efforts. Its Nationally Determined Contribution (NDC) under the Paris Agreement states that the country is working towards an 8 percent GHG emissions reduction compared to business-as-usual (BAU) by 2030, with the possibility of surpassing that benchmark to 25 percent conditional on international support. Its national plan for implementation of its NDC identified 68 primary, cross-sector activities, which include both adaptation and mitigation efforts.

To meet these targets, Vietnam is focusing on climate action governance and activities in sectors such as energy, transport, agriculture, and waste management. These measures include building a national GHG inventory system; establishing monitoring and evaluation systems; facilitating more public transport; establishing fuel consumption and emissions standards; improving sustainable forest management; and enhancing waste management practices and capacity. On the adaptation side, Vietnam is also looking to improve its capacity for disaster management and to bolster its resilience to sea level rise (see Risk of Flood Mortality image[1]). This is where the World Bank, an NDC Partnership member, has stepped in to assist in disaster-proofing the transport sector to ensure that flooded roads do not impact livelihoods by preventing economic activity. Their efforts include creating flood maps and building flood-proof areas.[2] 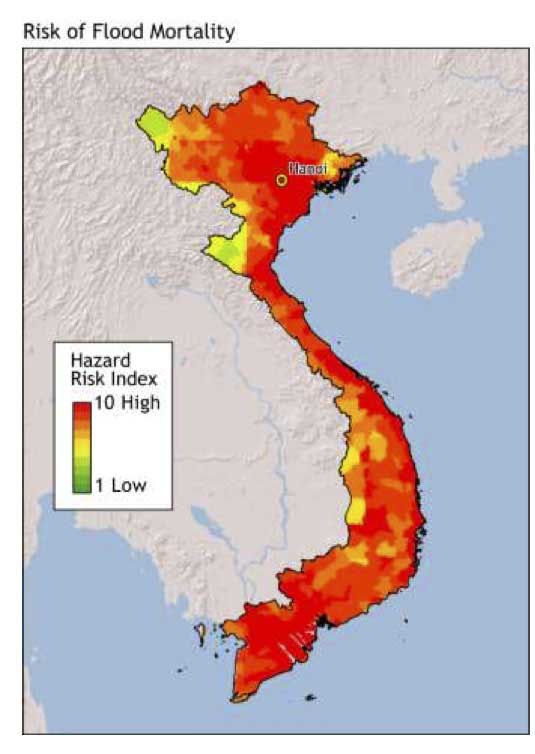 It is important to understand the context of Vietnam’s current and intended climate-related efforts because it is in the midst of substantial change. In the past 30 years, the country has experienced significant economic growth. The World Bank reports that “since 1990, Vietnam’s GDP per capita growth has been among the fastest in the world, averaging 6.4 percent a year in the 2000s.”[3] This has reduced poverty, enabled greater access to basic services, reduced infant mortality rates, and improved basic infrastructure like electricity, sanitation, and clean water. However, the World Bank also identifies that Vietnam needs more productive infrastructure, especially with regards to sanitation, telecommunication, water, agriculture, transport, and energy.

There are numerous projects underway that address climate impacts with linkages to development needs. For example, the French Development Agency (AFD) is supporting five million family farms, helping to avoid two million tons of CO2 emissions, and doubling the power generation capacity in the southern half of Vietnam to intertwine climate change and development efforts.[4] Working towards a similar goal, the Japanese International Cooperation Agency (JICA) has been developing a biomass fuel project in Vietnam to provide new sources of energy and reuse otherwise wasted resources.[5]

At the ministerial level, Vietnam’s Ministry of Industry and Trade (MOIT) has been particularly active in pursuing efforts that align climate change goals with sustainable development. One example of the many projects MOIT has implemented is the National Target Programme on Economical and Efficient Use of Energy in coordination with the Embassy of Denmark; the Ministry of Foreign Affairs of Denmark; and the Danish Ministry of Climate, Energy, and Building.[6] These types of initiatives that are driven by the Vietnamese government with partner support are an important piece of a larger picture.

Vietnam needs a broad strategy for NDC implementation that takes into account climate priorities and development needs and also coordinates partner activities. At present, Vietnam is engaging with NDC Partnership members through two streams of NDC-related activities: i) planning and ii) implementation. At the planning level, Vietnam is receiving on-demand technical support from Partnership members like the German Agency for International Cooperation (GIZ), the United Nations Development Programme (UNDP), and the World Bank. Nationally, the World Bank is supporting NDC implementation by enhancing multi-sectoral and inter-ministerial coordination. Regionally, UNDP and GIZ are working with the country on three sub-national forums to enhance engagement of government ministries, development partners, and other stakeholders working on the nation’s NDC.

On the implementation level, Vietnam is receiving support from the World Bank on two key climate programs: Industrial Climate Competitiveness and NDC Implementation Through Green Transport. The former is currently finalizing guidelines and sets of indicators for an Eco-Industrial Park and the latter provides technical assistance to address climate change in transport in close collaboration with GIZ.

Also underway is a government driven joint work plan being coordinated between UNDP, GIZ, and the World Bank to help ensure a passing of the baton from one organization to another when there is a comparative advantage to ensure cross-cutting planning and implementation. Vietnam’s enthusiasm for engagement is evident in this exciting and interesting initiative to create collective impact. The joint work plan will fast-track Vietnam’s commitment to see implementation through by covering both its NDC objectives and its Implementation Plan as outlined for the Paris Agreement. The Vietnamese government has good capacity and has been making progress toward advancing its climate change agenda. A joint work plan will help the Government link the pieces together to converge planning with implementation and impact.

In an effort to connect planning with implementation, Vietnam is asking help of the Partnership, specifically GIZ, UNDP, and the World Bank, for an NDC review through a consultative process, enhancing institutional arrangements to support effective and sustained climate change work on both the national and local levels, and to support implementation, particularly in the transport sector. UNDP will be hosting an NDC Forum in September.

The NDC Partnership will post updates about its progress and key milestones on this blog... so stay tuned!