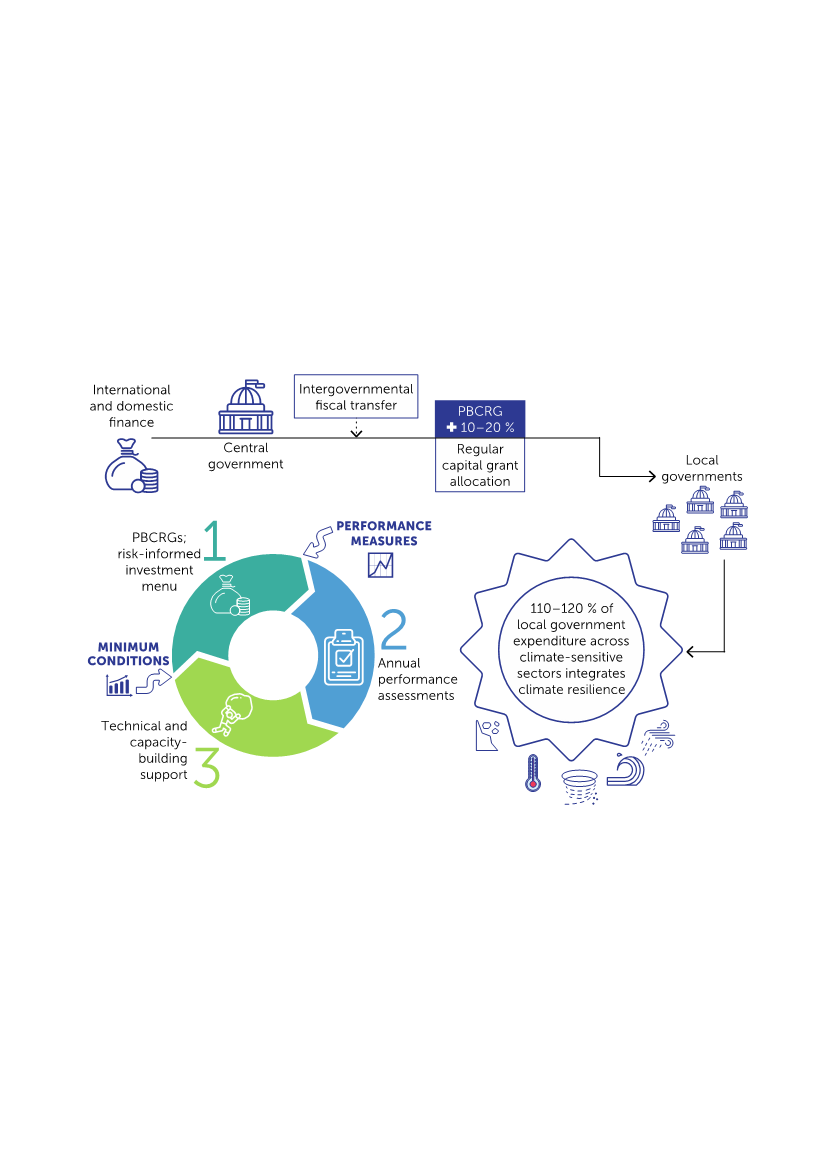 Residents of Char Montaj might not be experts in climate change, nor might they have even come across the term much in the past. But they know very well that one way to make their community more resilient to climate shocks like the cyclones that have decimated this region is by constructing durable roads.

The Local Climate Adaptative Living Facility (LoCAL), launched in 2011 by the UN Capital Development Fund (UNCDF), has delivered a series of small-scale adaptation interventions with big impacts for nearly 2 million people in Bangladesh. In one of the world’s most vulnerable countries to climate change, the LoCAL mechanism has proved a valuable means of bolstering resilience and delivering effective adaptation measures and is supporting many NDC Partnership projects. In Char Montaj, this meant building a road that will last.

“A road that doesn’t sustain in a tidal surge cannot bring any use in our community,” said Hanif Mia, Chairperson of the Char Montaj Union, or grassroots level local government. “We don’t build a road every year!”

“A sustainable road helps us move to the cyclone shelter during the cyclone, to trade our product, to travel to the distant medical facilities and for the children to go to school,” Mr. Mia added. “Without a good road that is resilient to climate hazards, we are at stake”.

LoCAL is today a global mechanism engaged in more than 23 developing countries, particularly in the least developed countries (LDCs). Through innovative Performance-based Climate Resilience Grants (PBCRGs), LoCAL delivers funds to local governments for climate action where it is needed most—at the local and community levels. PBCRGs are channelled through existing intergovernmental transfer systems and dispersed as part of a local government’s regular budget envelope, allowing them to cover the incremental cost of making projects climate-resilient.

Minimum access conditions have to be satisfied to secure access to PBCRGs and this monitoring and evaluation continues through the grant cycle, as outlined in the image above.

“Implementation of LoCAL in Bangladesh clearly demonstrated how the mechanism can be adapted to meet very specific local needs while at the same time strengthening local government capacities and their existing systems of operation,” said Sophie de Coninck, LoCAL Facility Manager. “We hope other countries will look to the experience of Bangladesh as a model for how LoCAL can really work to deliver climate resilience for communities and by communities.”

Climate change is expected to cause a rise in sea levels and surface temperatures with devastating consequences for Bangladesh, which sits on the low-lying delta of two of the largest rivers on the Indian sub-continent. One of the most densely populated countries in the world, the impact of extreme climatic events like floods and cyclones threaten the lives of many of its 160+ million citizens.

Recognizing the country’s vulnerability, the government of Bangladesh is highly active in planning and taking action on climate change. The government has prioritized the promotion of climate change investment, adopting a fiscal framework that is designed to channel more resources towards investment in adaptation measures. The Climate Fiscal Framework (CFF) provides principles and tools for climate fiscal policymaking, helping to identify the demand and supply sides of climate fiscal funds (expenditures vis-à-vis revenue or finance, respectively). The CFF was developed by the Finance Division in 2014 to facilitate an enabling environment covering:

The Government of Bangladesh has made important progress in meeting its international climate commitments. It has developed a National Adaption Programme of Action (NAPA) and NAP Road Map, as well as the Bangladesh Climate Change Strategy Action Plan (BCCSAP). It also now includes climate change in public sector development project proformas.

Local governments in Bangladesh at both the ‘upazil’ (sub-district) and ‘union parishad’ (grassroots) level have been mandated to perform several key functions related to disaster preparedness and management, receiving fiscal transfers for infrastructure development and the delivery of services. LoCAL works with these local governments to ensure that their planning and investments are climate change resilient.

The LoCAL mechanism has been embraced as part of the Local Government Initiative on Climate change, known briefly as LoGIC. The LoGIC project is funded by the Swedish Development agency SIDA and the European Union, with some input from UNDP and UNCDF. LoGIC is also aligned with the government’s national plan and contributes to its priorities.

Bangladesh first embraced the LoCAL mechanism in 2014 with the roll out of PBCRGs in just three local governments. That quickly expanded with the country consolidating take-up so that today, 72 local governments are tackling locally identified actions through LoCAL’s system of PBCRGs. As of January 2020, a total of 263 small-scale climate resilience schemes had delivered direct results for 279,714 people and indirectly for 1,576,981 more.

The most common actions identified by local governments and funded through PBCRGs include:

Back in Char Montaj, the community’s newly constructed road stands at an elevation of 1.5 meters, making it resistant to flooding and water surges. Along its 2 km length, trees have been built on its sloping embankments to prevent erosion and soil movement.

On a daily basis, the road will improve villagers’ lives, enabling famers to trade and children to go to school. And when the next cyclone hits, their road will serve as a lifeline, providing an escape route to the nearest cyclone shelter.

An online version of the LoCAL brochure is available here: https://www.uncdf.org/article/5673/local-2020-presentation.