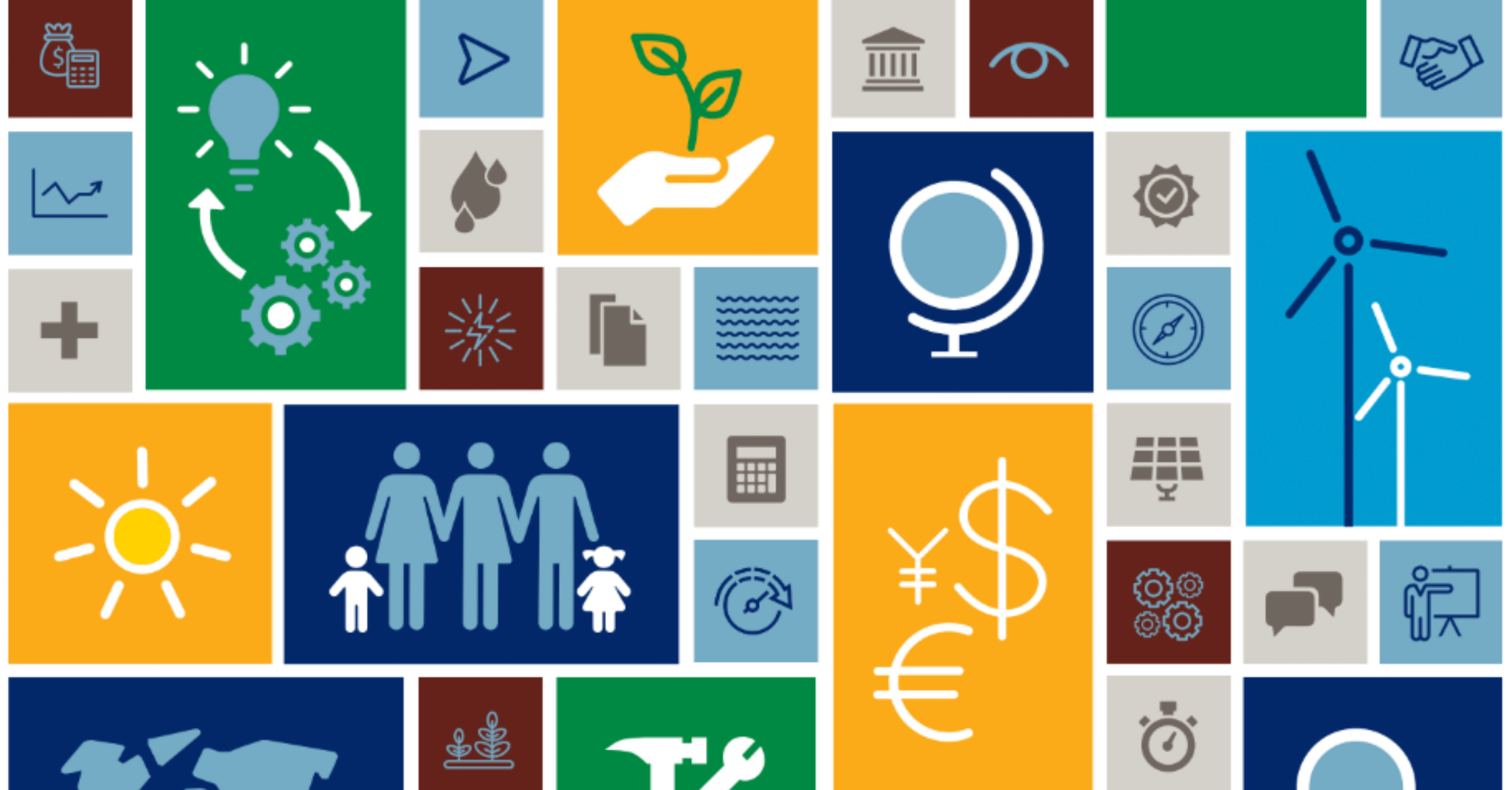 In a new analysis from the NDC Partnership Support Unit, Climate Action Enhancement Package: Lessons learned in developing implementation ready NDCS, the Support Unit looks back at lessons learned from the Climate Action Enhancement Package (CAEP) to share key insights on how and where CAEP support was the most impactful. In an analysis of 55 CAEP-supported Nationally Determined Contributions (NDCs) submitted to the UNFCCC at the end of 2021, in every country example, CAEP support enabled the development of more ambitious, higher-quality, transparent NDCs in closer alignment with Paris goals.

After developing a methodology to evaluate NDC enhancement, the analysis looked at 72 indicators comparing countries first and second or updated NDCs across ambition (28 indicators), quality (36 indicators), and process (8 indicators) to draw insights. NDC enhancement across countries illustrating the most impactful areas of support coordinated through CAEP are summarized in the figure below: 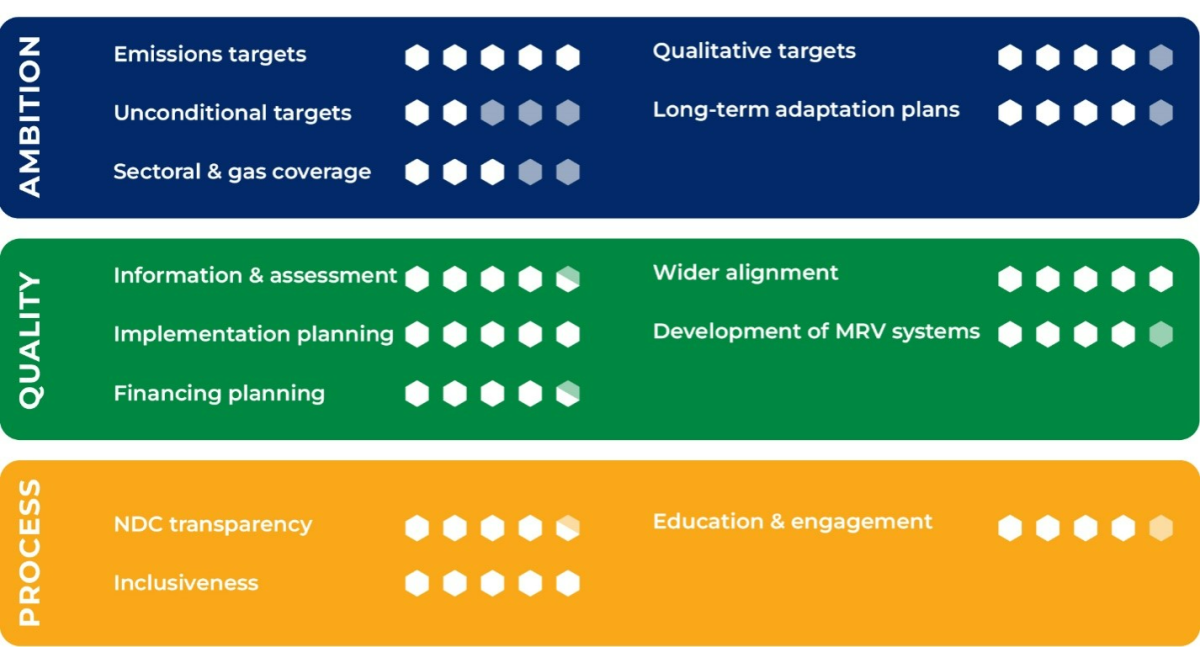 *Note: Each hexagon represents 11 countries (out of 55 total)

In 2015, when the first round of NDCs were submitted, many NDCs were developed quickly. Countries faced challenges in developing ambitious, implementable NDCs that linked climate and development agendas, including lack of sufficient government engagement during NDC preparation, limited capacity for costing and budgeting, and lack of monitoring and evaluations systems to ensure countries were meeting their targets. 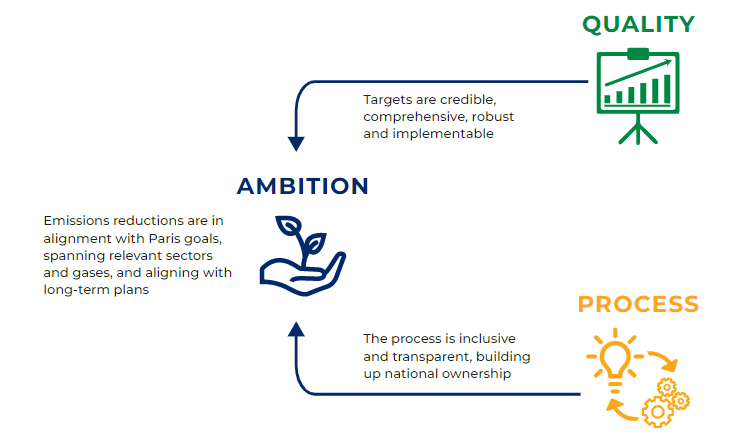 Under the Paris Agreement, NDCs are updated every five years with the aim of stepping up countries’ ambition to cut their greenhouse gas (GHG) emissions and adapt to the impacts of climate change. The NDC update process presents an invaluable opportunity to align NDCs with climate and development agendas, raise mitigation and adaptation ambition, and promote sustainable and inclusive growth. Yet, after the first round of NDCs were submitted, countries collectively fell short of the goals laid out in the Paris Agreement.

“As the world prepared to revisit their commitments under the landmark Paris agreement, we heard call after call for increased ambition. We were missing a process for countries to ensure their higher ambition was implementable: grounded in good data with inclusive processes that placed country ownership at the heart of NDC implementation,” says Pablo Vieira, the Global Director of the Partnership. “We leveraged the Partnership model, supporting countries in updating their NDCs by bringing together partners with diverse expertise to provide coordinated support, enabling countries to go further with their ambition.”

The NDC Partnership launched CAEP in 2019 to complement the Partnership’s Country Engagement Process. Created to deliver targeted support to countries, CAEP helped to enhance the quality, increase the ambition, and fast-track the implementation of countries' NDCs as a part of the 2020 round of updates. Through CAEP, 46 Implementing and Financing Partners delivered coordinated support to countries to build on existing NDCs and align climate and development agendas to promote sustainable growth and adaptation. In total, CAEP deployed over USD55 million in support of 67 developing Country Members.

This new analysis found that all 55 updated NDCs assessed were enhanced through the diverse support CAEP delivered, including:

With the lessons learned from CAEP, we know that strengthening NDC quality and processes are indispensable enabling factors to empowering greater NDC ambition. When countries engage in inclusive and transparent processes to develop credible, implementable targets, grounded in country ownership, they can further align emissions reductions with the Paris Agreement and align climate and development agendas with longer-term goals.

For further information and detailed analysis on the outcomes of the Climate Action Enhancement Package, please read the full CAEP Report here.