Home Earth’s Own Responses: Using Nature-Based Solutions for Climate Action
Our Blogs
07 May 2019 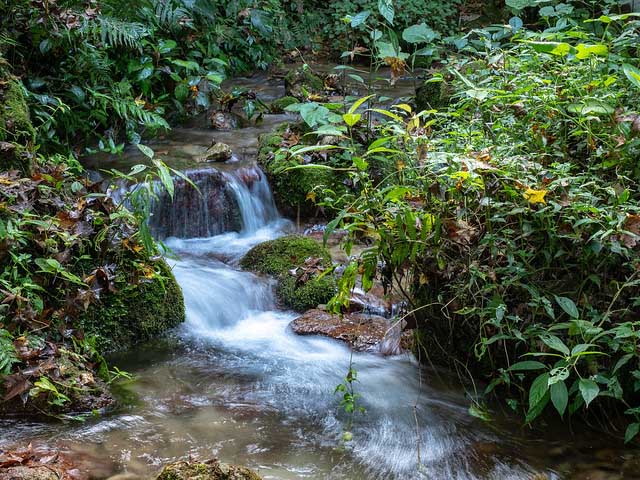 In Ocotepeque, Honduras, local communities are protecting vital forests which has resulted in the regeneration of natural springs and biodiversity. Photo by Lexie Harris-Cripp.

As global communities look for ways to address climate change and its impacts on humans and nature, there is one key response that has been claiming news headlines lately – implementing nature-based solutions or, more simply, letting nature be nature. Research has found that nature can provide the most cost-effective way of mitigating and adapting to climate change. If we let nature do what it has evolved to do – absorbing carbon, filtering water, storing greenhouse gases – we can take a large step forward in accelerating climate action.

Nature-based solutions, as defined by the International Union for Conservation of Nature, are actions taken to protect, sustainably manage, and restore natural or modified ecosystems, while also providing benefits to the well-being of humans and biodiversity. In 2017, a study conducted by The Nature Conservancy and 15 other institutions found that, “nature-based solutions provide up to 37 percent of the emission reductions needed by 2030 to keep global temperature increases under 2 degrees Celsius.”

In September 2018, Namibia released its NDC Partnership Plan which outlines its strategy to deliver its commitments to the Paris Agreement and fast-track climate action. The Plan identifies priority areas to implement the country’s NDC, which includes specific actions around nature-based solutions including agriculture, forestry, and other land use through actions such as desertification prevention and wildlife risk mitigation through fire breaks and rangeland restoration. Namibia’s Ministry of Environment and Tourism (MET), which leads the work with the NDC Partnership, is also carrying forward a biodiversity economy program with support from Germany, France and the EU Delegation. Through this project, policies and projects are being implemented to secure and diversify livelihoods in local communities that depend on natural resources – thus improving human wellbeing and conserving nature. Given Namibia’s vulnerability to climate impacts, but also, its unique climate and geology, the country is pursuing ambitious and innovative systems and solutions, while keeping nature conservation in its core pursuits.

Similarly, NDC Partnership member Republic of the Marshall Islands released its Partnership Plan in December 2018 at the UN Climate Conference COP24. The Plan is a results-based framework which aligns the country’s mid-century strategy with its new NDC. The Plan outlines six priority areas, with a second priority area focusing on developing climate resilience for people and nature. Through the Plan, specific actions around nature-based solutions have been outlined, including coastal protection and coral reef monitoring and conservation. The Plan also seeks to strengthen eco-system based adaptation through actions such as the Ridge to Reef Project, implemented by NDC Partnership members Global Environment Facility (GRF), Pacific Community, United Nations Development Programme (UNDP), United Nations Environment Programme, and the Food and Agriculture Organization of the United Nations (FAO), which aims to conserve at least 30 percent of nearshore marine resources and 20 percent of terrestrial resources across Micronesia by 2020.

As one of the first countries to join the NDC Partnership and the first country to release its NDC Partnership Plan, Honduras used its Plan as an opportunity to align its broad environmental policy, “Agua, Bosque y Suelo” (Water, Forest and Soil) with its climate and sustainable development agendas.  Specific actions outlined in Honduras’ Partnership Plan include reforesting one million hectares of forest across the country. The government  is supporting local communities in reforesting and protecting forests and ecosystems, which is safeguarding vital water supplies. Additionally, the government is implementing projects at local levels to provide households with power-generation alternatives in an effort to halt the use of burning wood for power, and ultimately stop deforestation.

Research conducted by the Nature-Based Solutions Policy Platform found that 66 percent of Paris Agreement signatories commit to restoring or protecting ecosystems in their NDCs, which is a strong step forward in conserving nature and implementing nature-based solutions. Turning these NDCs into concrete actions, like countries are doing through their NDC Partnership Plans, is the next step in ensuring that nature-based solutions and nature conservation are integrated into climate action.

As countries begin to craft their revised NDCs ahead of 2020, integrating nature-based solutions needs to remain at the heart of climate action. In the lead up to COP25, countries can reevaluate how they are addressing nature in their NDCs and determine where nature can be used as a tool for adaptation and mitigation.  The NDC Partnership is supporting several countries in revising their NDCs, and by bringing relevant Partnership members and stakeholders, such as The Nature Conservancy and World Wildlife Fund, into the revision process, we can better ensure that nature-based solutions are used to accelerate climate action. And as countries begin to implement their NDCs, it’s important to remember that sometimes doing nothing to nature is the best solution.

This blog was written by Taylor Robb-McCord, Communications and Marketing Specialist for the NDC Partnership Support Unit.